Darkest Shadow, the author of Melanie the Dog, considers this page to be unfinished. As such, some sections may change. 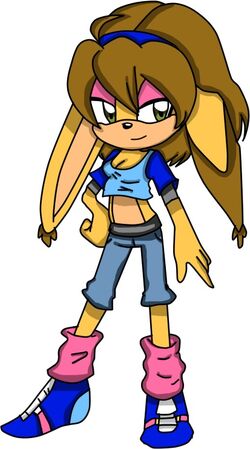 Melanie the Dog is a fan character adopted by Darkest Shadow. She is a girl from Paliside Town, who happens to be one of the top ranking tennis players in Lacancory. Currently, she has won eight singles opens, and one doubles open in her career. She is also the cousin of Alyssa the Dog.

Not very much is known about Melanie's early life. She was just born from two unnamed parents and was raised like a tough little girl. Melanie always watched tennis alone in her room and was inspired to start playing tennis.

She took classes and lessons and eventually got herself a personal coach. She trained to be one of the elites and quickly climbed up the ranks. Her whole life was devoted to the sport and tennis is all she ate, slept and breathed. She trained every day for at least two hours a day. She didn't really have a lot of friends to talk to, since most of her time was on the tennis court. By the time she was nine, she already was an elite.

People noticed her unnatural talent in the sport, like the PHS tennis coach. She was asked to play for her high school team and was the true MVP at only age ten. Though her team didn't win all of their matches overall, she destroyed every single opponent she faced in her singles match. She didn't lose a single match. However, she came very close when another aspiring eighteen year old played her, as she only won by a set (8-7).

Melanie was invited to her first Pro Open when she was only twelve. She was the first female under the age of 14 to compete in a professional match. The fact that a twelve-year-old was selected to play in a prestegious league full of people decades older than her was shocking. Though she didn't come even close to winning any of her first professional matches, it just inspired her to train even harder. By the time she was fourteen, she won her first pro-leauge match at the Tamaruin Open in Tamaruin City.

The best part about this victory was the handsome cash prize: approximately 2.3 million dollars. The word got around and suddenly she started becoming more well known in her area. Her high school team had unfortunately banned her from playing on the team, since now she's a professional, and other teams feared her. More and more people in the community recognized her and her accomplishments made her seemingly more popular in her school.

Melanie is fierce and competitive. When she plays sports, she always does her best to win in every competition. She has one goal when she is playing the game. It's not being fair, it's winning. She is overconfident of her abilities to kick the other person or team's butt in whichever sport she plays.

Melanie also happens to be sassy. She usually snaps at people and talks slang. She also usually is seen posing and putting one or both hands on her hips.

Tennis- Melanie is a great tennis player. Her skills and technique are so good, that she got on to a national tennis team. Her competitions are set from local Paliside Town, to the other side of the earth. She happens to be ranked #4 in the world. Her serves are fast and go as fast as 120 mph. She also controls the ball very well and tries to keep it in as much as possible. The other three people who are better than her tend to win less awards, as she is the most popular tennis player in her region.

Dancing- Being Alyssa's cousin, she sometimes dances with her. Her dance skills aren't bad for somebody who doesn't dance often. She once even was in a dance recital with Alyssa because of her somewhat good dancing.

Flight- Melanie also has the power to use her big ears to fly. She learned this from her cousin, and now can soar high and far. She is still a little wobbly when she flies, but she can still stabilize herself. However, she is not fast when she flies;in fact she is pretty slow and cautious.

Enhanced Speed- Melanie is also pretty fast. Being a tennis player, she runs fast during her warmups. Her top speed is about 40 mph. which is oddly fast for a mobian. She is nowhere near superhuman speeds, however.

Astrophobia- Melanie is afraid of the sound of lightning and thunder. She always thinks that a lightning bolt is going to hit her in her sleep and she will die from it. It is also almost impossible for her to sleep through a thunderstorm because of this major fear. Usually when she hears it, she will probably scream briefly and get startled. One time, she even cried when it was so close and loud.

Retrieved from "https://sonicfanon.fandom.com/wiki/Melanie_the_Dog?oldid=1800548"
Community content is available under CC-BY-SA unless otherwise noted.