Voted Most Handsome Character for Winter 2011!
Mazda the Lion 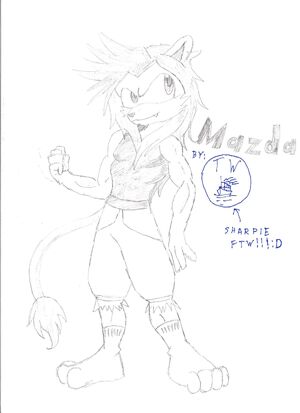 Mazda the Lion is the main character for Wh!te$tar.

Mazda is stern around new people, but warmer around friends. But he hates when people act foolish even though he'll crack a joke every now and again. He's calm and cool, and in fact the calmer he is, the stronger his attacks are. But in reality, this is just a cover. Mazda in actually bored on the inside, almost cynical. After over two thousand years wandering the Earth, everything's grown dull to him. The only thing that does help are his friends and adventuring with them. Whenever a new adventure comes, he'll jump right in just to ease the boredom. But in fact, he's gotten better lately. His friends have helped him, especially when Selenia became his girlfriend.

As a hedgehog, Mazda was a Shadow recolor. He was dark red, and had a tuff of hair between his brow. His quills were the same as Shadow and he also had white hair on his chest. He did, however, wear silver pants with an open, green shirt. His shoes were also silver and grey, with red straps. His eyes were blue, and his gloves had a sort of armor on them.

As a lion, Mazda was much taller, around 4ft. 3 in. and had considerbly more muscle definition. His muzzle also became a tan color and the fur split at the cheeks. He had red hair, and his fur was orange, though his eyes were still blue. The tuff of hair remained, however it was much more scruffy and defined. He wore a green jacket, which he kept open around the chest to reveal a black tank top. His shoes were very similar to his old ones but redesigned and armored too. His pants also stayed grey, and his gloves armoured (though redesigned).

Mazda was born a hedgehog and a fragent of Luke in order to keep the peace in the world. He wandered Mobius until the Angels too him in. After several weeks of observation and complete silence, Mazda learned enough English to speak simple sentences. After a year he was perfectly fluent and had an average knowlege of the time he was in.

He would spend his years working for the Angels, sealing demons and stopping fights. Among these adventures was his meeting with Ookamoni, who became his arch enemy. He eventually met Alice and Ray while hunting for Ookamoni. Realizing they were in danger, he decided to protect them and became their good friends. However as time went on, Mazda became infected by the one poison that kills all eternal beings: boredom. In the roleplay Mazda's Union, it was revealed to everyobe that Mazda was the last piece of Luke the Hedgehog. Mazda, being the good person he was, accepted his fate after stating hew "would not deny another creature the right to exist". Lorelei the Wolf then took him to the nameless world that binded each piece of Luke. After saying his good-byes, Mazda fused with Luke, disappearing and becoming a true Angel.

When Ookamoni took in enough Cores, he reached a level of power equivalent to the Dividers. With this power, he revived Mazda as his puppet as an insult to Alice and Ray. After a long battle, Ray used Alice's powers over memories to unlock and control the Core in him. With his new power, he freed Mazda. However, because Mazda couldn't use the form of a Hedgehog (since he would no longer be tied to Luke) the engraving on his Core, a proud Lion, became his new form. With his power, he defeated Ookamoni, releasing the Cores he stole and creating new Angels.

He then returned home, much to the happiness of this friends and aquaintances. Though because he was resurrected close enough to the same time Ookamoni lost the Cores, he became the fourth Divider.

A few months later, Mazda noticed that Ookamoni hadn't been seen or heard from. Before the Angels could start a formal investigation, a young detective known as Erika the Fox dropped him a tip that Ookamoni was on the other side of the world, plotting to destroy the Angels by summoning a creature known as the Impetus. Although the others are confused, Mazda explains that Impetus was a dark creature that fed off Chaos. Deemed a danger to Mobius, it was sealed in an empty dimension several millenea ago by the Angels. Although he doubts Ookamoni would use Impetus, he realizes the threat is too great to risk and goes on anyway.

Their adventure takes them between both Exstasia and Mobius, where they meet Christine Delacrux, the Empress of the World]] as well as The Secretary of G.U.N. Along the way, they also have to fight several strange characters. He easilly reaches the place Erika mentions, but finds that she had Ookamoni prisoner and that those figures they fought were actually her Furniture. Instead, Erika was using Ookamoni's power to summon Impetus, commenting that they'll know why in a little while. Mazda fights her, and frees Ookamoni, but even though they defeat her, they can't figure out a way to destroy Impetus. Ray then reveals that if they combine their powers, Amvaj the Embodiment, the World Spirit, can destroy it and restore unity. The plan works, but a strange figure walks in, just as they're about to celebrate...

Christine Delacrux shows up and paralizes everyone. She draws out Erika's Core and feeds it to her, giving her powers and abilities to combat Mazda. When they demand what's going on, Christine reveals she is the Empress of Exsasia and the Secretary. Christine was trying to recreate the events of 2000 years ago, where a massive war was fought for control of the World Well, the portal to other dimmensions. In order to do this, Ookamoni had to enrage the Angels enough that they would turn not only against him, but against every other organization (such as the Eggman Empire or G.U.N.) and try to control Mobius. She goes on further to reveal that she goes from world to world, destroying them to create a path to the Perfect World, which she plans to conquer and rule. But in order to do that, she has to kill Amvaj, who couldn't have been summoned without Erika releasing Impetus.

Ookamoni, enraged that she used his emotions and Lorelei's death to manipulate him, breaks free and battles her. He tells them to take Amvaj and head to Exstasia and he'll catch up. But as everyone gets in the portal, Lorelei watrches as Christine stabs Ookamoni, killing, yet at the same time, releasing him. As she yells his real name, Marcus, he feels relieved that he could die as her brother.

On Exstasia, things aren't going as well. A war between families is being fought too, threatening to destroy the world. Mazda then realizes that the only way to open the path to the Perfect World is for both worlds to die at the same time. Bewcause Mobius and Exstasia are in different dimmensions, they're still connected. He asks Lorelei to take them to the World Well so they can confront Christine.

She takes them to the tallest mountain on Exstasia, where Erika is waiting to stop him. After a long battle, Erika is stabbed and left to die. Lorelei then opens the portal, however they realize Amvaj is weakening. The wars are taking up massive amounts of Chaos, draining Amvaj of power, which will slowly kill him and both worlds. They pass through, and meet Christine on an island floating above both planets.

She tries to explain how the events repeat themselves, how everytime heroes show up to stop her they die at her hands. But she applauds their determination, and offers that they live with her once she finishes conquering the Perfect World. But they refuse, and a great fight breaks out. It's difficult. Neither Mazda, Luke, Alice, or Ray can seem to get past her magic. However they do get past her, and the do weaken her. But in a desperate move, she reveals that Marcus is alive, and being kept her her hostage. If anyone moves her her, she'll kill him for real, but Lorelei, who remembered her brother's sacrifice, momentarilly gives up her pacifist way and phazes through Christine.

She looses all feeling, and stumbles through the gateway behind her into the Gaiaverse. Here, on the brink of death, she tries to recal her original world, the one she lost. With every world she'd been to, Christine forgot her own and abandoned it. But for a moment, as she recall's it's name, sge falls into the lake that represented the Perfect World. Although she finally reached it, she died the moment she hit the water. Christine slowly drifted to the bottom, where she withered and desintegrated in the pure water.

However, the beads she kept, which were actually seeds for Worlds, floated on the surface. Amvaj, now healed with the worlds saved, asked Mazda and the others to busy the seeds down the mountain. Once they did this, new pools sprouted and flowed down the mountain, replacing the universes Christine destroyed with new ones. Mazda and Marcus then went back to the Mobius fountain, and with everyone else had countless adventures on Mobius for many, many years to come.

Add you name if you're his friend, enemy, or anything. ^^

Mazda's powers all have to do with Chaos, however in a different way than most other characters. Chaos is the equivalent of Mana or Life-force in Wh!te$tar's view on Mobius. The most common way to harness this power is from an item, such as with Super Form you would take the power from the Chaos Emeralds. Unfortunately this process is extremely inefficient. However the way Mazda uses Chaos is an ancient practice passed down from the Angels. Rather than taking the Chaos from an object, the Chaos is drawn from Mobius itself with the assistance of a Core.

With this, Mazda has the same power as a Super or Hyper Form, but it's more efficient and lasts much longer. This primordial variant of the Super Form is dubbed Evangeline Mode. Instead of the Chaos radiating around him, it extends as several, glass-like wings.

His way of using Chaos also allows him to control and manipulate Earth into complex shapes and weapons. From tiny pebbles used as bullets to massive boulders to crush his enemies, his power is limited only to the amount of Earth around him. This ability is only heightened by the Evangeline Mode.

But Mazda's most used ability is his scythe, which he uses in a Soul Eater fashion. With this weapon he can slice through walls, swing from flagpoles, and rip ope the pavement.

Retrieved from "https://sonicfanon.fandom.com/wiki/Mazda_the_Lion?oldid=1840317"
Community content is available under CC-BY-SA unless otherwise noted.