Maxine is a hybrid of a sheep and a rabbit. She's a cute, smart girl, but she tends to get excitable. Her best friend in the world is Sara the Tanuki, and they are commonly seen on detective-style missions. She is a parody of Max from the Sam and Max series. 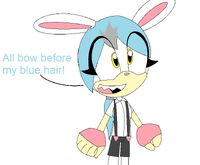 Maxine is a somewhat crazy girl. Her father was a rabbit and her mother was a sheep, and it's somewhat implied that her personality mostly comes from her mother. Although somewhat crazy, she is still a great friend and ally.

When she was 11, she met Sara, a tanuki who loves solving mysteries. Together, they became the "Reckless Super Sleuths", and are centered on solving any mystery in the only way they know how: carelessly and without any professionalism.

Hyperactive but highly intelligent, Maxine is the life of the party. She's highly comedic, and loves getting a laugh out of her best buddy, Sara. She tends to be quite charming, yet deceptive, with her bunny-lamb cuteness.

Maxine, despite being a hybrid, mostly resembles a white rabbit. She has blue hair with a silver highlight. Her eyes are yellow. She is known for having large, somewhat sharp teeth. She wears a white shirt with black shorts; her shorts are held up with suspenders, and her suspenders have heart-shaped snaps. Her shoes are black Mary Janes with white socks. She wears fingerless pink gloves. 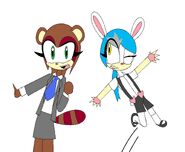 Sara and Maxine: Reckless Super Sleuths!
Add a photo to this gallery

Maxine is voiced by Chika Sakamoto in Japanese and Colleen Clinkenbeard in English. Here are some things she would say.:

"Look at me! I'm a sheep AND a rabbit! I'M THE FRIGGIN' DEFINITION OF CUTE!"

"Don't mention the grey streak in my hair! It makes me feel old."

"What do you mean I look nothing like a sheep?"

"I DARE YA TO CALL ME A SMALL LITTLE PIPSQUEAK AGAIN!!"

"I never go ANYWHERE without my heart-shaped suspender snaps!"

Retrieved from "https://sonicfanon.fandom.com/wiki/Maxine_the_Hybrid?oldid=1800547"
Community content is available under CC-BY-SA unless otherwise noted.