Maxie Rivals was developed by Backbone Entertainment and supervised by Sega Studio USA, playable on the PSP, Nintendo Wii, XBox 360, and PC. Maxie Rivals was released on April 3, 2013 in North America.

The Chao have gone missing and Maxie and Max Flippercorn were instantly called to investigate. It turns out that Eggman Nega (once again masquerading as Doctor Eggman) has stolen the Chao and hidden them inside a haunted mansion. His plan is use Blop, a completley unknown creature, to feed off the chao to become more powerful. This way, he would use Blop as his servant to take over the world. However, to get Blop to feed, the seven Chaos Emeralds are required. So, Eggman Nega hires M.L. the Otter to collect the Chaos Emeralds. The Secret Thing has also gone missing, so Jake the Wolf teams up with M.L. to find it.

Meanwhile, Razz the Bear is being brainwashed by The real Eggman (again) and Shawn the Bandicoot finds him. After knocking some sense into him Razz, promises to help him with whatever he needs for the time being. Shawn informs Razz that chao have gone missing and that Maxie would think more highly of Shawn if he helped find them. So, the two of them work together to find the missing chao. The real Dr. Eggman sends Ned McMuffin and Freckles Jeeperchomp to investigate the Blob character, and to see if he can help him with anything. He soon realizes Nega's plans with Blob and insists that the pair find the chaos emeralds before Nega gets to them, and that they get Blob on their good side so he will help.

All of the teams meet up at the Mystic Haunt Zone where the chao are found. Despite M.L. only collecting six of the Emeralds, the portal opens anyway and Nega gets Blob to feed off of the chao, making him large and much more powerful. Despite possessing Maxie, Max, Jake, and M.L. (depending on who the player plays as), Blob is defeated by the other teams. Ned and Freckles defeat the Blob and Blob swallows up Nega. However, Freckles reveals that she had another Chaos Emerald hidden in her shoe. Ned uses the Emerald to teleport back. Nega is left trapped inside Blob, who, during some odd digestion, opens a portal inside his stomach and teleports him to a different dimension.

Maxie and Max save all the Chao and bring them to a Chao Garden, and Jake finds the Secret Thing in the Emerald Detector that he and M.L. stole from Eggman Nega (oddly). M.L. steals the Master Emerald and runs, though Jake catches her and takes it back, flying off on a pile of rocks. Shawn and Razz confront Maxie, who is flattered by the attempt. Before she can finish her though, Shawn immediately thanks her and runs off. Razz facepalms and runs after him. Maxie is at first confused, then finds that her wallet is gone and chases after the two.

Maxie Rivals has 8 different playable characters at first. After defeating Story Mode once, a ninth (Freckles) is playable. All characters use Homing Attack and Spin Dash to move through the levels. Each character can also use a "Signature Move" by collecting Rings, or defeating enemies to fill the "Sig Meter."

Maxie Rivals has four main Single Player modes. Story Mode is the main single player mode. Players will go through each of the game's battle modes (listed below) and levels to advance the plot. Each zone has three acts and a boss, with the exception of the final zone. The characters are divided into four teams (Maxie and Max, Ned and Blob, Razz and Shawn, Jake and M.L.) and each character has their own story.

The game introduces a new mode called Free Play In this single player mode, players can choose any one of the eight characters (nine after completing Story Mode once) and play through the zones in traditional 2D Sonic fashion. They can also try Time Attacking, or finding the ten hidden Chao in the levels. There are no opponents for this mode. This is a first for many of the characters featured.

In addition, players can also try the Cup Circuit and Single Event modes. Races and battle can be customized in every aspect, and players can try to earn cards by completing challenges.

Maxie Rivals boasts a new "Battle Mode" with six different types of competition in addition to the main race mode. These modes are also worked into the story. The lengths of the battles can be set though the selection menus.

Each stage has three acts and a boss, instead of the original game's two.[1] Acts one and three are races, and act two is always a battle. In the story mode, the races may be substituted with single character missions such as "Time Attack", "Collect X Rings", and other challenges. Certain stages can be skipped in the story, depending on the character chosen. 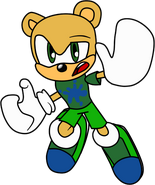 Retrieved from "https://sonicfanon.fandom.com/wiki/Maxie_Rivals?oldid=1498459"
Community content is available under CC-BY-SA unless otherwise noted.