The author of Matsu, considers this page to be unfinished. As such, some sections may change.

Matsu is the finale result of Project Messiah, along with his cousins from the Space Colony Ark. His mom and aunts were made with Celestial DNA from Professer Okami"s partner Willis, whlie his dad and uncles were made with Black Arm DNA from Professer Okami herself. Then the two DNAs were placed inside two females of 13 animals, chicken, mouse, boar, wolf, snake, rabbit, horse, sheep, monkey, tiger, seahorse for dragon subsitute, cat,and ox. Then soon he was found freezing in a cave by Anna, who helped warm him up, and finding out he was family, she welcomed him to the family. Soon, he meet the girl he like, they dated and years later, got married and had a daughter.

Though he is usually able to control it, Matsu is very hot tempered. He especially hates bullies, and does everything in his power to defend people from them, including going on regular patrols to find and stop bullies. His oath as a member of Celestial 13 keeps him from attacking players except in self-defense, but he has learned how to taunt bullies into making the first move, allowing him to defeat them without any repercussions. He is fiercely loyal to his team and has developed a relationship with Roxy.

While he was taking a walk, he saw her being attack by her own robot, so he step in aand saved her, it was love at 1st sight for them both, they talked alittle and told eachother how they feel. Over the years after many dates and times he saved her, they married and had a daughter, named Allenby together, starting their family. together.

Matsu is a male mobian rooster with blue feathers, blue hair which is styled long with some of it apart with red markings and three pieces of hair sticking up with the same color and marks, a yellow beak and light blue eyes. The clothes he wears is a white shirt with green sleeves and bottom trimming, brown shorts and white shoes with yellow on them. 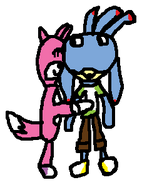 Their wedding
Add a photo to this gallery
Retrieved from "https://sonicfanon.fandom.com/wiki/Matsu?oldid=1661803"
Community content is available under CC-BY-SA unless otherwise noted.