The author of Marshall the Owl considers this page to be unfinished. As such, some sections may change. 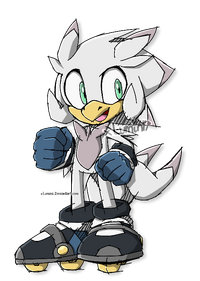 Marshall is a male, 13-year old short eared owl. His feathers are rather messy; three that grow straight back, while two stick up like ears at the top of his head, and another two that curl to the front and stay down. The edges of his grey noticable feathers are a darker grey, including the patch on his chest, as well as his tail.

Marshall wears navy blue gloves with black cuffs, with a small, white wristband to keep them on his hands. He also wears a pair of black, white, and grey extreme gear skates, created and given to him by a friend. He can wear them as normal shoes by retracting the wheels, and then when he's ready to race, protract them. Under the skates, he wears a pair of black socks. Also, while racing, Marshall wears white goggles to prevent the wind from getting in his eyes and making his vision blurry.

Marshall is a very prideful owl, who loves to sometimes brag about his speed and skill as an extreme gear racer. He is very serious when it comes to a competition, staying focused throughout the entire race and giving it his best. Even when people sometimes look down on him for being a "little kid", Marshall sometimes goes on a rant about he's just as good as anyone else; possibly better.

Marshall can also be described as a night owl. He spends most of the day resting his body and allowing it to recharge, while at night he's busy exploring the city and looking for opportunities to show off his extreme gear racing skill. He describes himself as a free bird, being able to to whatever he wants, when he wants.

Because Marshall has an Ark of the Cosmos in his possession, he is sometimes able to control gravity around him, blasting at incredible speeds while racing. However, it does need time to charge up, and cannot be used to disable gravity for long periods of time. He also cannot disable the gravity of another person, but can use charges of energy converted from gravity to push items or people back, similar to psychokinetics.

Marshall is also extremely fast and stealthy, which supports him while both racing and dealing with real life situations. He sometimes has to steal from others just to support himself, but never gets caught. Even when he does, he can usually evade police cars when on his extreme gear roller skates.

Marshall does not have any parents, and is usually on the streets just waiting to start commotion. During the day, he usually stays in the back alleys, hidden away from others. Because of his young appearance, Marshall can usually get support from other people if he asks, like for food or money. But when times call for desperate measures, he sometimes steals, but almost never gets caught.

Retrieved from "https://sonicfanon.fandom.com/wiki/Marshall_the_Owl?oldid=1830359"
Community content is available under CC-BY-SA unless otherwise noted.