Start a Wiki
This character is only relevant to the Doriteverse continuity, created by Disgustedorite. Please do not use anything from this page for your own fanon without permission. 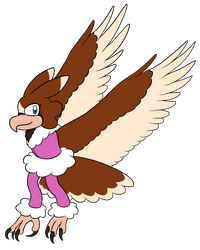 Marrow the Vulture is a mobian vulture character created by Disgustedorite. Though not created for it originally, she exists within the Doriteverse.

Marrow is a reddish-brown bearded vulture with a pinkish beak and feet, dark grey-brown claws, nose, and beard, and cream flight feathers. Her tail is a fan of several brown feathers tipped with cream, and she also has three long feathers atop her head that are also brown with cream tips. She has fluffy cheeks and a cream stripe between her eyes. She wears a pink fluffy coat and pants and no shoes. She lacks hands on her wings, instead using her feet to grasp and manipulate objects as is typical of birds within the doriteverse.

Marrow is a faux-mysterious individual--that is, she tries to be mysterious but doesn't actually give off a mysterious vibe. She's not especially social, preferring to live in isolation. She has an odd obsession with bones, beyond what is normally expected from a vulture, and it affects her day to day life.

Marrow is able to spot even the slightest movement on the ground while flying through the air. This allows her to spot and confront trespassers anywhere in her territory.

Marrow has learned to be able to keep control of her flight in very strong winds, even while being knocked around by hail. This allows her to live in windy mountains that most birds would struggle to even approach.

Marrow can become frustrated and argumentative when her false mysteriousness or her obsession with bones are called out.

Retrieved from "https://sonicfanon.fandom.com/wiki/Marrow_the_Vulture?oldid=1843311"
Community content is available under CC-BY-SA unless otherwise noted.