Maroon Kokoro is a Seedrian girl. She is an excellent spy, but rarely uses her abilities, as she prefers living a simple life. She is apparently very wealthy, as she lives in a penthouse at Starman Apartments. She made friends with Erica when they were at a video game store. 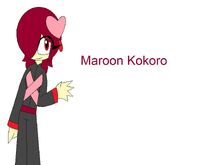 Maroon Kokoro was originally heading down the path to be a top-notch spy, but when she turned twelve, she decided to focus more on adventure than espionage. She's made a fortune from her adventures, and with her fortune, she has taken a break and bought out the penthouse at Starman Apartments.

She met Erica Sakura at a local video game store. The friendship was instant, and Erica is as close to Maroon as she is her own roommates.

Breaking the "snobby rich kid" stereotype, Maroon is quite caring and generous. She is quite sneaky and resourceful due to her spy skills.

Maroon has maroon-colored hair that covers one of her red eyes. A bleeding heart flower sprouts on the side of her hair, resembling a barrette. She wears a jumpsuit of black, red, and pink; her boots are black with red laces.

Maroon is voiced by Romi Park in Japanese and Amy Birnbaum in English. These are some things she would say:

"Sure, I'm rich, but I won't rub it in your face or use it to bribe you into friendship."

"I got the new Pokemon Mystery Dungeons game!!!"