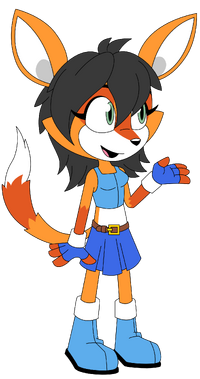 Marley the Bilby is a member of the Dusty Gulch Freedom Fighters.

A slender bilby who stands a little over three feet tall, Marley has a somewhat short muzzle with a triangular nose, large, somewhat diamond-shaped ears, and a fairly long, slender tail.

Her fur is primarily deep saffron in color, with a white muzzle, chest and stomach, as well as a white tip to her tail, while her forearms, eye markings, the bridge of her muzzle, and the middle of her tail are flame in color. Her hair, which is shoulder-length, is black in color, and her eyes are eton blue in color.

As the Tralius Egg Army continued to make their presence known within the Parched Prairie Zone, a small village at the edge of the Redstone Desert was attacked by a Super Badnik with a horde of Badniks under his command. They destroyed much of the village, causing its residents to flee in all directions; among those able to escape was Marley, who fled towards Dusty Village.

However, she ended up being pursued by Buzzbombers, who harassed and attacked her as she ran, until she finally came across a female quoll. The bilby's cries for help were swiftly answered by her, who used a weighted rope to snare one of the Buzzbombers, before using it as a flail to take out two more.

Spurred on by the sight of her rescuer, Marley managed to take out one of the Badniks herself by grabbing one of its antenna and slamming it into the ground. The remaining one, realizing that it was outnumbered now, ended up fleeing. Grateful for the help, Marley introduced herself to the quoll, who in turn introduced herself as Alexis.

Marley relayed her story to Alexis, telling her that her home had been attacked by a mole-like robot; while she had managed to escape, some of the residents had been captured by the Badnik Horde. Alexis, realizing that the Tralius Egg Army was mobilizing faster than previously thought, invited Marley to Dusthaven.

While not as imposing of a fighter as her allies, Marley has some hand-to-hand combat skills at her disposal, primarily relying on hit-and-run tactics to harass and whittle down foes if she needs to; like Jesse, she opts to wield a slingshot as her "weapon". Her bubbly and cheerful nature can serve as a sort of "buff" to her allies, using verbal encouragement to spur on her allies and even bolster their strength.

She is quite fast and stealthy, and typically serves as a scout for the Dusty Gulch Freedom Fighters. She also has a nearly photographic memory, and can easily remember specific details of whatever she sees, so long as she has the time to memorize.

Marley has no specific resistances to any Elements or energy-types. She is quite fast, and can easily outpace slower foes and evade their attacks.

Marley has no specific weaknesses to any Elements or energy-types. Her defenses aren't anything special, therefore she mostly relies on her agility to try and evade potentially devastating attacks.

A typically cheerful and bubbly person, Marley likes to try and keep a positive outlook on life, and can be counted on to encourage and cheer up her allies whenever they need a boost; she can even encourage them while in combat, potentially bolstering their strength.

She is pretty pacifistic, and does not like to fight if she can help it; if she finds herself in a combat situation, she'll always attempt to disengage first, and only resorts to defending herself when she has no other option.

Inked version of current design
Add a photo to this gallery
Retrieved from "https://sonicfanon.fandom.com/wiki/Marley_the_Bilby?oldid=1846053"
Community content is available under CC-BY-SA unless otherwise noted.