Mariko was once a human girl that was raised by her master who was a powerful magician. He taught her the ways of magic and soon at a very young age, Mariko became a inhuman witch. By "The Way of the Witch", Mariko had to leave her master and go on her own, even though leaving her studies incomplete. She once had to go to a sacred magical ritual that requires witches to transfer their magic into the Earth creating Mana, the power source of all magic. But from some strange force, she was shoved into the core and her body painfully sucked in all the magical energy. Because of this, her powers are now 10x more powerful then they once were and she even gained the power to control mana, the very essence of magic. Because of this, she was later hunted down by the guardian Mia MaJikku, to seal her away into the Southern Border. There Mariko had some issues with the ruler and ended up killing him, making her princess, even though she had a life of luxury, it was still in a world filled with pain and dread. After discovering a large magical grimoire, she was able to find a spell that allows her to go past the Southern Border's Sacred field. She was then able to freely walk about Hayashi again, however Mia still searches for her endlessly always sending her back. But as long Mariko has that book, she can always enter Hayashi and leave the hell she was tossed into

Mariko is a novice witch however despite this fact she is rather powerful. But not being too expert in magic she has more raw power then anything.

She's always seen carrying a book strapped to her back, this book is a large grimoire she found in the Southern Border. Mariko can be sweet, however she can be rather cowardly unless she's facing against Mia who she sees as a rival and enemy, when fighting her she becomes rather determined and demonic as well.

Mariko's power is abnormal compared to normal witches due to an accident that happened 5 years ago. Because of this she's nervous about using her full power and relies on simple spells so that she can focus on making the spells more powerful instead of accidently overpowering powerful spells. Despite this she uses crystal magic, a very powerful type of magic that needs high mana concentration from the user, which is no problem for her since she can control mana itself.

Because of her power and unstablability she lacks friends and people who can trust her. The only people that have befriended her is Gen and Chrysanthemum, who is her advisor and assistant respectivaly. Infact she has more enemies then anything with people trying to always kill her or send her away... However it's come to a realization that Mariko maybe having a relationship with Kei, this relationship was at first negative with the two fighting, but then it turned positive as Kei began to fall in love with Mariko.

Mariko also sees Zenzei as an idol. She's always looking up to Zenzei in her power and skill, knowing that she has abilities that can easily defeat her in seconds. However despite how powerful Zenzei is, Mariko is still stronger in mana concentration.

Being someone so young and new to magic, and yet have so much power inside of her, it is easy for her to get confused and stressed. When she reaches a certian stress level, corruption occurs. This "corruption" is when her mana begins to rely on black magic and altering her mind and body. She becomes almost unstoppable at this point, becoming a monster. The only way for her to revert back is to cut off the supply of black magic the mana in the air is creating for her, only highly skilled magicians are capable of attempting this. When the magic is cut off, Mariko will go into a sudden shock which brings her into a temporary death-state, but is revived seconds later by being feed clean pure mana from the earth. This doesn't just harm others but herself, black magic damages the mind and soul of whoever abuses its power.

Mariko took notice of many magicians have a forte in magic. For a long while Mariko couldn't figure out hers, until one day she came across Kimi. After explaining how she feels so upset of not having a forte in magic, Kimi replied about something with crystals! Mariko remembered about mana crystaliztion and with her high mana control she should be able to make as many magical stones and crystals she wants. After making a prisim crystal, she tested it finding out her magic can be increased or split apart depending on the shape. Mariko finally found what she was best at, but crystals are only a assistant at spells so she must use other spells for offensive means.

Mariko solidfies mana into crystals that can be used and replaced

Mariko makes a crystal in the shape of a prism, despite it's beauty when her power surges into it, it can leave a nasty burn mark when hit

Mariko turns her body into crystal, making her invincable, however it only lasts a short time since movement becomes limited.

Mariko creates several crystals that then is powered up with light magic creating a maze of light that burns the skin when touched, she can also move the crystals making it difficult to avoid, but making her vunerable.

Mariko creates arrow-head shaped crystals and tosses them at the enemy, they are capable of homing-on the enemy if infused with magic.

Mariko creates sapphires out of very dense mana, these increases her magical power by alot! However, they are only magic stones and can be broken.

Mariko creates rubies out of very dense mana, these stones can enhance her fire spells or turn into fire balls and be tossed at enemies.

Mariko creates emeralds out of very dense mana, when fused with light they are able to hypnotize whoever sees them.

Mariko creates topaz out of very dense mana, these stones become very large and can create a sheild on Mariko, but it can be broken with enough force.

Mariko creates chrysanthemum out of very dense mana, these stones cannot be used on herself however can be given to someone to increase their bravery and determination

Mariko creates bloodstones out of very dense mana, these stones shatter after they are created and absorb themselves into Mariko healing her wounds, it can also be used on others.

Mariko creates obsidian out of very dense mana, these stones shape into spears which are very hard to break. They can be either handled by hand or by psychic force.

Mariko's spell that contains holy magic, this is what she uses when she is out numbered against alot of demons. The power is very strong and the blast hits a large radius, however there is a price, Mariko losses her ability to move her body due to her being a witch. It goes away over time.

Innocence- Diamond's Wrath towards the Sins

Mariko's most powerful spell, she crystalizes her body into diamond and whatever she touches also crystalizes (not into diamond however) this spell is very powerful, however there is a great fear in using this power. If Mariko uses this for selfish desire, then she will have a possible chance of incasing herself in diamond therefore costing her life. But used for the protection of others, her body becomes very smooth and her mobility increases making up for her weakness. (Poor physical capabilities) 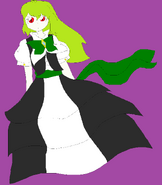 Corrupt Mariko with her mind and body altered, is sometimes seen with black wings