View source
This is an article about Marie Stun, a character created by Megaphantaze on 04/6/2014. 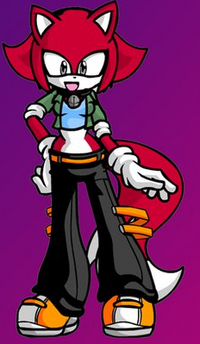 "Getting lost to forest may change your life totally."

Marie is a red fox, who has silver bell on her neck. Her attire includes green vest, blue shirt, black jeans and Orange shoes. She also has big tail.

Marie is wild and bubbly person, who likes helping people. She has addicted attitude to talk about nature and it's good sides. She is somewhat disappointed about those, who lives in city. She is also against animal killing and destroying forests.

Marie once lived with her parents. From the child, she has been respected animals and nature. One day though, when she was travelling with her parents, she got lost into forest. She couldn't find a way to home, but the animals of forest wanted to help her.

marie decided to stay with her new animal friends and her respect to nature grew more. she grew with the animals in the forest and got an ability to communicate with animals.

She has great respect to Juurikas the Bat, who can control nature. Marie is known also as a protector of forests and it's animals.

During her life living at forest, Marie got an ability to talk with animals. Only she can understand, what animals says.

Her other ability is to make spores. She has many spores which are listed here:

The arsonists aren't as stupid, as they could look like. They have found a ways, how to stop marie from ruining their plans. Marie's only weakness is suffering of the other animals. If Arsonists manages get animals, they would thread to hurt them, so Marie's mind will get confused. Rude, I say.

When living in forest, she found friends Pax Paindlik, Elastic jungle girl (For her the forest is her jungle) and Juliette Juurikas.

Marie doesn't trust  those who lives at the city. The facility makes her sad and how world is slowly going to it's finish line. She just needs some time to get use to it. Marie has decided to take stopping the upcoming doom as her life's mission until she dies. She does everything to stop it and fulfill the mission