The only demon Mazda wasn't able to seal away, Ookamoni is a powerful spirit of death. Generally believed to be the real Grim Reaper, he can take life with his bare hands. However after a long fight with Mazda, his hands were sealed and he was left almost powerless. Banished from Hell, Ookamoni wanders the Earth, searching for Mazda and killing any who get in his way.

Ookamoni is ruthless and cruel. He's merciless and craves only blood and despair. He's calm and cool and analyzes each problem before him. Ookamoni will deny any ideals that clash with his own.

As the Prince of Hell, Ookamoni has traits of the Seven Deadly Sins. He's prideful and has little or no sense of humility. Ookamoni is also greedy for death and blood while also carrying a rage inside him stronger than a hurricane. He's envious of others he considers stronger, and his taste for battle is insatiable. But he's also relaxed and sloth-like when battling opponents he doesn't consider on his level. He's also filled with lust for women, but usually keeps this under control.

But Ookamoni isn't all evil and cool. If his plans are shattered or he can't win a fight, he'll go virtually insane for awhile. He'll destroy everything, kill anyone, and pulverize his enemy to ash.

Ookamoni was born a normal Mobian. He lived a peaceful life with his younger sister, Lorelei, and he himself was calm and relatively calm. But during an intense war, he and his sister rose up and formed a group of Renegades to stop the fighting. However during the fighting, Lorelei was killed and Ookamoni was devastated. The rage inside him gave him incredible, dark powers. He obliterated the opposing army with darkness and it's said he actually cried flames over her death. Soon, Ookamoni was branded demon and was sent to Hell.

In Hell, his newfound cruelty and hatred of humanity helped him rise in the ranks until he became Death itself. With his new task, he took thousands of souls efficiently and effectively. But as he did so, he used his new knowledge of the Soul to experiment and work on how to revive Lorelei. He mutated Mobians and humans alike, forcing other people's souls into them until he could create a vessel as close to Flora as he possible could. Eventually he created the Neo-Cores as a means of enhancing life forms and holding their souls. However he realized that only through time and correct manipulation could he create the vessel he desired. And so, he's been slowly changing a poor Mobian's bloodline for thousand's of years, now closer than ever.

Ookamoni's reputation soon caught the eye of the Void Masters, an underground group that terrorized tribes thousands of years ago. They approached Ookamoni in the night and battled him so he could prove his worth. After defeating each member, Ookamoni joined them. He quickly rose as their leader and helped them with whatever goals they had. But he used their power to keep experimenting.

He began used his new status of leader to capture even more subjects. Ookamoni started experimenting with Chaos, mutating it and creating hideous creatures. But by fully developing the Neo-Cores, he realized he could make everyone equally powerful, all the same: creatures he called the Mirages. By fusing a living subject with a Neo-Core, their Chaos energy would be protected inside the crystal, creating beings that could not truly die. All that was left was the vessel for Lorelei.

Ookamoni's rise to power didn't just alert evil organizations. The Angels soon learned of his experiments and sent Mazda the Hedgehog to lock him in Hell. The struggle lasted for days and nearly everything was obliterated. Although Mazda couldn't banish Ookamoni, he did seal his hands so he couldn't take any more lives. This was the first time Ookamoni went insane. Without blood or death, he descended into madness for a short while.

But he soon continued his research, remembering his quest to revive Lorelei. He used the Void Masters to collect more souls and subjects as he wandered the Earth, looking for a bloodline worthy of his intervention.

He'd eventually learn of the Eternity Scrolls, a gateway to Lacrose's Library, an endless dimension holding the history of the universe starting from the dawn of time. By using this knowledge, he could find the key to Lorelei's revival. So one night in Shamar, he killed the family meant to guard the scroll. But after realizing he couldn't retrieve it, he threatened the boy he left alive to bring the scroll to him.

Just recently, Ookamoni discovered the last ingredient for reviving Lorelei. He realized he'd need huge amount of Chaos to rebuild her body, an ingredient he'd need Alice Maeda for. Next Ookamoni had to find the vessel to revive her. Although he tampered with blood for so long, he realized his sister's perfect vessel was in the past: Tikal the Echidna. Finally, somebody needed to retrieve her soul from Heaven, a task he'd force Mazda to complete. Now, it's only a matter of time.

Once he did revive Lorelei, she told Ookamoni about how wrong everything he had done was. Because she would not accept his intentions, he went insane and tried to keep her soul for himself. But after a long battle (in which he tried to blow everyone up) Ookamoni was defeated. It was then that Lorelei, now trapped on Earth as a ghost, denounced him as her brother and branded him as a demon. With no one to turn to, Ookamoni fled, swearing to get his sister back.

As a demon, Ookamoni is able to control darkness and is strongest at night and under a full moon. He feeds off sadness and despair, giving him strength and adding to his powers. However, he fights primarily with fire, creating it from his hands and molding it into many forms. Ookamoni can call on demons, but his first weapons are normally two claws, molded under fire sparked by the burning of an innocent.

Ookamoni is also able to unlock his Hellfire Mode if he is angry enough or there are enough negative emotions around. Although he used to use this several times, since he was banished he's used it to a much lesser extent. In this form, he'll grow several demonic wings and his fire attacks will burn with fire from Hell. His normal attacks are also boosted so he's as strong as a Super Form. This was the form he used in his battle with Mazda, Mazda using the Evangeline Mode to counter.

Ookamoni can also control people if the Darkness inside them is strong enough. When he controls them, a strange symbol appears on their forehead and they have lifeless eyes.

Add your name if you're a friend, foe, or anything. 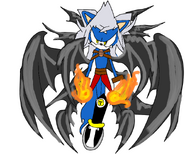 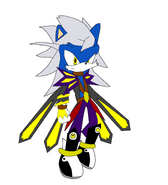 By NikaTheRenahog on DA.
Add a photo to this gallery

Retrieved from "https://sonicfanon.fandom.com/wiki/Marcus_the_Wolf?oldid=1780710"
Community content is available under CC-BY-SA unless otherwise noted.