Skyblade743, the author of Marcee Archer, considers this page to be unfinished. As such, some sections may change.

No point in looking back when the path ahead is more fun! 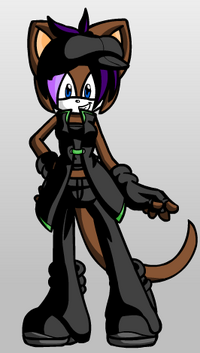 An aspiring gymnast, Marcee attempts to save her friends have resulted in her being pulled into a world of superpower's that is incredibly out of her depth.

Marcee possesses brown fur all over her body, plum hair with a light purple bang, a white muzzle, pale skin inside her ears, sapphire eyes, and black fur on her feet. She typically wears a black tube top with a black and green jacket over it, black pants, socks, gloves and shoes. She also wears a black newsboy cap.

Marcee is funny, constantly happy and energetic. She seems to never run out of energy, moving around constantly and almost never stops talking. This helps contrast her with her more downbeat friends, and she regularly helps bring up moral. However, she can get serious when she wants to, especially if someone is trying to hurt her friends.

Marcee was born in Britain. Her birth parents didn't have enough money to provide for her, so she was given away at a young age to a couple who spent a lot of time traveling and had recently settled in Britain. Marcee lived in Britain until the age of 10, when her adoptive family moved to Iravia. During her 3rd year in High School, Marcee met a shy young girl called Natalie Walker who had recently joined the school and a boy named Oliver Dragen who had recently moved to Iravia and like Marcee had no friends in the contry.

Marcee bought the three together and they quickly became fast friends throughout high school. Marcee and Oliver also had a relationship, and although it broke down after 3 months they remained on good terms. Eventually Natalie moved to Westopolis and Marcee dropped out of high school to follow a professional career in gymnastics, although they still keep in touch.

Recently, however, Oliver was reported missing by the Iravian police following Doctor Eggman's takeover of the world. Worried for her best friend and ex-boyfriend, Marcee dropped out of gymnastics for a while to try and find him. While she intially feared the worst, Marcee discovered a lead that bought her to a mysterious fight club in Westopolis called Disaster Club. There she called Natalie to assist her in finding their lost friend.

Marcee is an incredible gymnast, being able to easily jump and flip through the air. This gives her an edge in combat, where she can use her incredibly mobility to surprise her opponents. She also seems to possess incredible strength, having a bite that can puncture tires and being able to throw people twice her weight around like they weigh nothing at all. Despite this, she doesn't seem to have any superhuman enhancment, and it's been theorised by Natalie that maybe it simply stems from her enthusiam and desire to protect her friends.

Marcee is a terrible swimmer. She dosn't like going on boats much, and although she doesn't exactly get sea sick she would prefer to avoid them when possible.

Macee also has very sensitive ears, and any extremely loud noise used to cause her to freeze in place and then run to avoid it. Although loud noises still affect her and cause her to tense up, since having to deal with large crowds during her gymnastics career Marcee has become much better at dealing with noise, although sudden loud noises can still provoke her original reaction.

Retrieved from "https://sonicfanon.fandom.com/wiki/Marcee_Archer?oldid=1871456"
Community content is available under CC-BY-SA unless otherwise noted.