— Maranda after finally reuniting with her biological brother 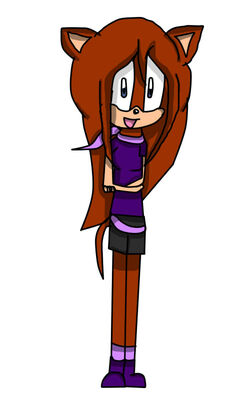 Maranda the Hedgehog is a fan character created by Darkest Shadow. She is a huge fan of the outdoors and loves to get some fresh air out in the sun. She is the adoptive older sister of Michelle the Cat and best friend of Lina the Hedgehog and Sasha Petals.

Brooke was born on June 30. She lived with her mother, her father, and her older brother, Derek. However, her parents had trouble raising not only one, but to children. But, they had to live with it.

Around 3 years old, Brooke was set up for adoption. Brooke had no idea what was going on, but she didn't like it. Then she met a married couple, Paul and Dawn. The two adopted Brooke. She was extremely upset that she had to leave. His brother, who was 5 at the time, made a promise to go see her. Paul and Dawn gave the adoption fee, and took her to Mariala City.

Her name changed from Brooke to Maranda when adopted. She also met her adoptive litte sister, Michelle. Still missing her real family, she liked playing with her new sister. With the Fifi family, she had the oppritunity to do whatever she wanted.

During her first years of elementary school, she met her first best friend, Lina the Hedgehog. She also met her other best friend; Sasha the Fox. The loved to hang out and have fun. Maranda also discovered her amazing running abilities.

In the fourth grade, Maranda learned started to take lessons in the clarinet. She was really bad and didn't know a thing about it, but made slow progress. She also had her first camping trip with her two best friends. She also heard that Lina was babysitting her little adoptive sister.

During the fifth grade, she became better at playing the clarinet. She also joined the swim team and became one of the fastest swimmers on it.

Right in the first year of middle school, Maranda joined the track team. She was probably one of the fastest and most agile competitors on the team. Also, along with the help of her sister, she found out about her electrokinetic powers. Michelle also helped her with her acrobatic skills and balance.

In the last year, her skills at playing the clarinet were fantastic. She was playing duets with Sasha on the oboe. Also, her swimming skills went far up.

Maranda got into boxing and joined the boxing team of Mariala City, she was very strong and never gave up. She also became an absolute gym class hero. Her athleticism was making every event look superiorly easy and sets new records easily.

Her skills in boxing improved over the course of one year. She also became the fastest member of the track team running 28 mph, which set a new record. From there, her life was pretty straight forward and had a blast during both junior and senior proms.

As of now, Maranda attends the Alskora College along with Sasha. Her clarinet skills are superior, her running got her running up to 40 mph., her athleticism has improved and is visiting her home once a while as her brother visits her.

Maranda is a very energetic person. She is always exicted to try out new events. She also has an extreme love for being outside and having fun in the sun. She even might sometimes try to go out in the winter to have fun. Other people view her has a very fun person, therefore a good friend to have cheered up.

Maranda also is quite loud. She tends to talks a lot, which could sometimes be a bit annoying to others. She likes to talk about her fun in the sun things.

Being happy doesn't mean she's tough though. She is a boxer afterall and is extremely hard to beat. Only few people come out victorious. She trains hard for everything she does, even track and field. During those events, she is extremely hard to even come close to having a score to.

Swimming- She has a very good talent for swimming, not only is she fast on land, but she's quite fast on water. She doesn't compare to her speed on land, but is pretty swift and quick.

Clarinet Playing- Maranda also has an amazing skill in playing the clarinet. She is very good at it as of now. Sometimes, she plays duets with either Sasha, Alexis or Lina which later become triplets and the quartets.

Bike Riding- Maranda also takes a lot of interest and talent in bike riding. She would often compete in competitions and pursuit cycling tournaments. Sometimes, Maranda likes to go bike-riding with her friends to see nature and to sometimes race against others.

Boxing- Maranda is a very good boxer. She throws very powerful punches to knock somebody out for quite a while. Sometimes, she fights against her own sister in Boxing vs Wrestling.

Enhanced Speed- Maranda is extremely fast. Her top speed ever is currently 48 mph. Nobody even comes close to speed on her team. She trains everyday and hopes to be recognized by the world of track and get into the Olympic Games.

Maranda, along with her speed is very agile, she knows where to turn in the 400m run. This makes her even harder to run against than anyone on the track team.

Electricity Manipulation/Fulgurkinesis- Maranda has only one elemental power: Electricity manipulation. Michelle taught her this power and is know more better than her and uses it for a good reason. She can manipulate powerful lighting bulbs and send them soaring at the speed of light.

Enhanced Jump- Being fast, Maranda also can jump very high. Her record for the high jump is 7'6, an impeccable height a little less than double her size! This can help Maranda do flip stunts, if she had that talent like her sister.

Derek the Hedgehog- Derek and Maranda are brother and sister. However, Derek knows Maranda as Brooke, since he doesn't know about her name change. They don't visit each other that often, so they are both excited to see each other when they do.

Michelle the Cat- Michelle is Maranda's adoptive younger sister. They loved to spend time together when Maranda still lived in Mariala City. But being in the college of Alskora City, they don't see each other that often anymore. Both used to have Boxing vs Wrestling fights.

Sonic the Hedgehog- As a track athlete, Sonic is Maranda's inspiration. Sonic also befriended Maranda at a race and usually go for a run together.

Shadow the Hedgehog- Shadow and Maranda are distant friends. They didn't interact a lot since of the city distance.

Lina the Hedgehog- Lina and Maranda are best friends. They always used to spend time together back when they lived in the same city, but now see each other only now and then.

Sasha Petals- Lina and Sasha are also best friends. They both attend the same college, so both still hang out a lot and spend time together.

Alexis Petals- Alexis and Maranda are good friends. Being cities apart, they don't talk very often. They used to have flute-clarinet duets.

David the HedgeFox- David and Maranda don't really know each other very well. They used to have races together, and Maranda usually wins.

Retrieved from "https://sonicfanon.fandom.com/wiki/Maranda_the_Hedgehog?oldid=1821681"
Community content is available under CC-BY-SA unless otherwise noted.