Manic the Hedgehog is the son of Batula the Hedgebat and Queen Aleena Hedgehog , as well as the same-age brother as Sonic and Sonia. 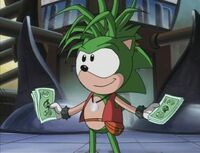 His family and friends

Knuckles the Echidna
Dislikes
Putting Back things he stole

Manic the Hedgehog, along with his siblings, Sonic and Sonia, to Queen Aleena, and Batula the Hedgebat, though at the time, their father was unknown. Unlike his siblings, Manic had been born with bat wings, and Aleena had brought him to his father, who made a potion to remove his wings painlessly, making him a normal hedgehog, and lowering suspcions of who their father was.

When Manic was nine years old, his mother had mysteriously gone missing. Her advisor, Joseph T. Marley had agreed to rule Mobius in her place until her hopeful return. Manic and his siblings set off on an adventure, in hopes to find their missing mother.

The next day, they had stumbled upon a lab owned by Dr. Robotnik, a kindly scientist who had originally lived on Earth, but somehow ended up on Mobius through unknown means. They had befriended him quickly, and the scientist intended to make inventions that would improve thier abilities.

His brother, Sonic, was given a pair of Super Sneakers that would increase his speed. However, while testing it, the power had fused with the Chaos Emeralds that Robotnik had stowed away for safe keeping, and a rotten egg in a nearby fridge. Sonic had gone so fast that not only did he break the sound barrier, but he turned himself blue, Manic green, and Sonia into an eggplant color. From that same explosion, Robotnik's DNA had fused with the egg, turning him into the infamous Dr. Eggman. The three siblings fled from the scene soon after being attacked by the crazed and newly evil scientist.

Manic appears in Sonic Fanfiction as Queen Aleena's son, and Sonic and Sonia's same-age brother. His current role is unknown.

Since Manic has not made any formal appearances yet, it is difficult to determine if he has any differences than his canon counterpart or not. If he does, they have yet to be shown.

Manic is a skilled drummer.

He is also a master thief, and lock-picker. He also seems to know computer hacking to an extent.

If Batula did not remove Manic's wings as a baby, his special ability of the three siblings would have been flight.