The author of Mammoth Mogul (Blue Blur) considers this page to be unfinished. As such, some sections may change. 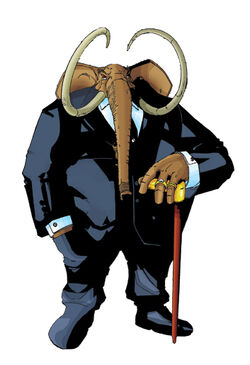 Mammoth Mogul is a war criminal infamous for his unrivaled superpowers, which surpasses even that of the Great God. He has lived for billions of years thanks to the immortality given to him by the Master Emerald. Although he is extremely powerful, he was banished by the Great God and the Seven Gods in the Emptyverse, an area in the Special Stage where time and space doesn't exist. Because he can no longer use his powers outside of the Emptyverse, he was forced to take indirect control of other villains in the many multiverses, hoping that one of them will give him the necessary source of energy to break him free. He has been briefly mentioned time after time in the Blue Blur saga, and wouldn't make a full appearance until the post-credit scene in Blue Blur: Dawn of Paradox. He also appears in cameo appearances in other works of Mac the Writer in SFW, namely Codename: Avalanche and the 2017 film adaptation of Freedom Planet, to connect some of his works alongside Blue Blur in a cinematic universe.

Just like his impressive powers, he's also a very, very tall Mobian. He is around 50 feet tall, which is around the size of a skyscraper. He has very long and oddly thin tusks for his species, though he rarely uses it in battle. Bizzarly enough, he has huge ears and very little hair for a Mammoth, leading people to question if he's only half-mammoth, and is also half-elephant. He's normally seen wearing a black suit, holding a red and yellow cane, and mostly sitting on his golden throne he fabricated himself from antimatter. He also wears a golden ring on his left middle finger, but he stated that it isn't a Mobian Ring.

Mammoth Mogul is a proud, egocentric, vile, and God-like monster. Being the most powerful being in the universe isn't enough for him; he wanted more, and more means taking over the entire multiverses, and he has the power to do that. Having no sympathy for others, he only indirectly controls other villains to do his bidding, but does persuade them with offers and delivers them. Being angered over losing his complete powers by being banished in the Emptyverse, he can get mad very easily, and anyone would know what length he would go to when anger clouds his mind.

His birth and origin remains a mystery, but there are details that was well-written in history.

Over a billion years ago, during the prehistoric era of Mobius, Mammoth Mogul accidentally stumbled across the Master Emerald's shrine, where he discovered the legendary diamond itself. He was the only one who managed to absorb part of its power (which nobody has done before and since), and became immortal and powerful. Using it for his need of destruction and taking over the world, he managed to conquer all of Prehistoric Mobius, and went ahead to take over other parts of the multiverse he lives in. When he was deemed too powerful by the Gods, they were forced to break the rule they sworn to stand by, and intervened Mogul from further chaos.

However, they were outmatched by his incredible power, in which he can destroy the Great God if he wanted to. In fact, he was going to when the Gods showed up, but as a last resort, the Great God and the Seven Gods were forced to banish him in the Emptyverse, where he can never leave ever again. Because of the Emptyverse's lack of time and space, Mogul became powerless, and can only ever use his ludicrous power within the Emptyverse. Since then, nobody, no matter how vile they are, has ever come close to excel the Great God's powers, like Mogul did, giving Mogul a sense of intimidation from him, that even the most cruelest man shivers before him. 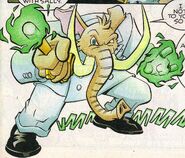 Mogul, demonstrating his strength from the Master Emerald. 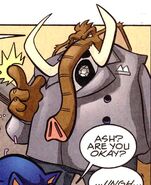 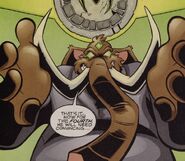 Mogul absorbing a part of the Kingdom Stone.

Mogul trapping Tails in a prison orb.
Add a photo to this gallery
Retrieved from "https://sonicfanon.fandom.com/wiki/Mammoth_Mogul_(Blue_Blur)?oldid=1664726"
Community content is available under CC-BY-SA unless otherwise noted.