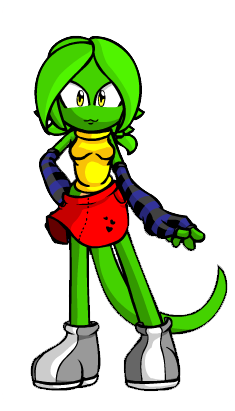 Mamba the Snake is, as the name suggests a snake, she is a member from Team Star-dust. She haves super speed and is the smart element of group.

She is aggressive, determinate, independent and dislike begin annoyed, but she is also very kind and very care about his friends and relatives and dislike unnecessary brutality and killing.

Mamba is a typical tsundere whit anyone (constant aggressive), but some times is sweet, when lose the coll she becomes extra-aggressive and bite anyone that annoy or make her lose the coll (and potentially poisoning the victim) or in extremes case she eats her victim.

Mamba haves some kind of exhibitionist tendencies, such as uses less cloths as than her should and appears in the front of his allies whit fell cloths (usually the only panties and bra) to not. She admits that uses this to teases Amethyst for every time the he annoy her (but he don't care much)

She born in Savana Zone, rise as a orphan, whiteout known his parents, alone. Late she haves formed in elementary school whit very high grades, and late met Hexos and Tridal and form the Team Star-dust.

As a snake, Mamba haves poisonous fangs, and a very strong tail that able con crush the bones of anyone

Mamba have flexible bone structure, also using her tail and arms she delivers a powerful constrictive move that can crush the bones of most of persons (different of most constrictors that kill by asphyxia).

She is almost the fastest member of team Star-Dusts, she can runs at a absurd speed of 550 Km per hour

Her poison is very potent, able paralyzes, cause nausea, hallucinations and the victim and kill in less then half-hour.

She is the most intelligent member of team, during his scholar time she haves the highest grades of all students, haves a great mathematical precision and haves, also are good whit chemistry and physics. She is extremely proficient whit creates machines and weapon.

Amethyst: Her relation ship whit Amethyst is very close, Mamba usually try ignores him, but some time Amethyst attitudes anyone her, which leads Mamba to bites him, but Amethyst don't care much about this to Mamba annoyance, whose leads he to swallow him twice. But despite all this mistreating Amethyst still liking her (Mamba is unaware of Amethyst like her).

Hexos: Her close friend and some times play the role of brother-sister.

Semas: Her biter rival and evil counterpart due his intelligence, both hate one each very mutually. This rivalry come since from they school days.

Retrieved from "https://sonicfanon.fandom.com/wiki/Mamba_The_Snake?oldid=1538613"
Community content is available under CC-BY-SA unless otherwise noted.