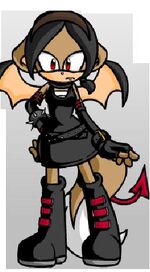 Majeek in her new,Evil form
Nicknames
Maj,Jeek,Mageek (By Krinkinko),
Age
14
Gender
Female
Species
Flying Squirrel
Appearance
{{{appearance}}}
Attire
{{{attire}}}
Relatives
Unnamed Mother (deceased), Unnamed Father (Deceased),
Romantic Interest
Cloud
Alignment
Anti-Hero (formerly Good)
Likes
Lol,
Dislikes
{{{dislikes}}}
Skills/Abilities
Flying,Gliding, Tail whip, Teleportation (Never works),
Friends
Akita, Krinkinko, Suprano, DD, CG (To an extent), Elag (extent),
Foes
Forms
Ape Form
Majeek is a flying squirrel who never found out how to enjoy life. She is one of Krinkinko's many ex-girlfriends. She was dating Lol-Asl the Bee and sure of that now that she's an anti-hero. She is also an anti hero because she was adopted by an evil king, Suprano. Recentually Majeekala signed her name in blood for Superano her grandfather and now her last name is Viles. (as in bad)

Majeek was born in a farm on a ranch in the outskirts of Station Square near Twerunka jungle. She was a very healthy baby that always enjoyed the outdoors and reading on top of the silo. She was an extremely happy child until one day when she was five there was an extremely powerful F5 tornado (261-318 MPH) that destroyed the farm and killed both of her parents. She was the only one spared but she was in critical condition. After about ten weeks in the hospital she was nursed back to health and shipped off to an orphanage. Ever since then she's always been wondering what's her purpose and she's always been so stiff and semi-depressed. She will get happy for a little while but then she'll just get sad again. Soon she met Krinkinko and the two started dating not long before Krinkinko dumped her. Currently she's single. She was recently adopted by a man named Dave but he couldn't deal with her and sent her back to the orphanage. She was thena dopted by the evil king, Suprano. It's shown that even though she's still plain at least now she's happier than she was a year ago.

She's very stale and emotionless. She's not 100% emotionless but she doesn't usually smile.She smiles more often now that her boyfriend Cloude (may be made) but still is shown frowning more than smiling. The biggest she smiled was when when she found out that she was an evil princess. She never really pays much attention to stuff and when she's alone she cries herself to sleep. She seems to not be that attractive hence the only two people that like her were Krinkinko and Lol and it seems that they would like anybody, regardless of looks. Although there is Cloude. She's also very demanding and scary when she wants to be VERY scary, seeing as she gets Lol to do whatever she wants him to do. She's above average IQ. She can also be described as plain.

Krinkinko-Because Krinkinko dumped her just because of her moodiness she now hates him, they are now rivals.

Lol-Lol disguised himself as the pizza man just to get a good look at Majeek. Initially Majeek didn't return the feelings but she was forced to when Lol absorbed her boyfriend Clide. Lol's feelings are not sincere though and he only likes Majeek because of her looks. Lol took her boyfriend and is now forced to date him.Since Lol is bad that is why she is anti-hero now. though Clide escaped Lol and Majeek dumped Lol. The two still seem to hang out though showing that she might still have feelings for him.

Suprano-Majeek was adopted by Suprano a King that is "not so good." Like all teenagers, she just wanted to be a princess not caring that she would be an evil princess. After giving her the royal tatoo she screamed, waking up the entire kingdom now as a "chore" for that she has to kill the president of Station Square. There is no turning back.

Coude-Majeek and Cloude have known eachother for a long time. Only for two years have they been dating though. Majeekala's sister CG also loves Cloude. Though she does, Cloude thinks she is crazy because she had him on a leash. Cloude likes Majeek because she respects his nerdyness. Cloude also hates Akita because he thinks that she gets in the way of thier relashionship. (I may make Cloude a charactar. Still working on it)

As a flying squirrel she can glide through the air and climb trees but interestingly she almost looks nothing like a squirrel. She can stab people with her demon tail's tip and she can choke people with both of her tails. She's also great at scratching people's face off. Though she never uses her abilities because she doesn't hurt people...she will hurt herself on ocassions though. Another interesting ability she has is to change her physical appearance according to what alignment she is (Hero, Dark,Neutral).

Majeek can't swim and can't survive falling out of high places, hence what happened at an early age.She's afraid of fire and tornados. Also her way of fun is different from others, so they think she is a bore. She's also allergic to chocolate. She was also weakened when Lol asl The bee took her boyfiend Cloud away.

Majeekala's theme song is Mean by Taylor Swift. Because people treat her so badly, This song is the best way to express herself.

Retrieved from "https://sonicfanon.fandom.com/wiki/Majeek_the_Flying_Squirrel?oldid=1799968"
Community content is available under CC-BY-SA unless otherwise noted.