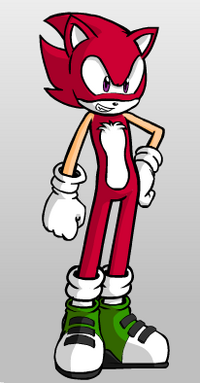 Ugly red nerd (by Shadow when he does something stupid)

Magma is the adopted son of Sonic

(THIS PAGE IS A WORK IN PROGRESS)

He is a red hedgehog, he looks like sonic but with some differences, he has white arms, mouth, and fur belly that resembles Tails, he has purple shoes and eyes, and he has head spikes that resemble Shadow.

He is kind of dumb, but he has some scientific knowledge, he is sometimes mean to Sonic.

Retrieved from "https://sonicfanon.fandom.com/wiki/Magma_the_Hedgehog?oldid=1873559"
Community content is available under CC-BY-SA unless otherwise noted.