Madoka The Light is a fan character created by GalaxyWorld27 (Known as sonicgalaxy27 on YouTube). Madoka is a female character in the Disco series who likes to protect her friends.

I can invent things if i want to help out my friends to stop all evil. My new home is more important then my friends 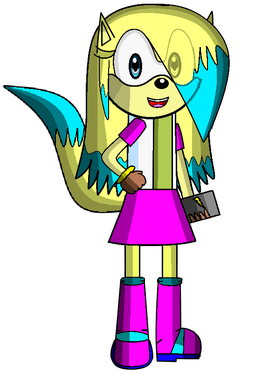 Hanging out with her friends

Pancakes (favorite)
Dislikes
When her lab being destroyed

When her creations and inventions fails

When her house is messing and dirty

Seeing her friends in danger

Getting clawed by a crab

Staying up at midnight (Sometimes)

When her boots gone missing

Seeing Eggman sad and all alone

For attire, Madoka wears a white formal vest and wears a green shirt with two purple shoulders inside of her vest, she also wears a brown wrist-length gloves with gold bracelets for cuffs, a purple dress and a tall purple/cyan boots on her feet with a cyan strap down the center and blue streaks.

When she takes off her gloves, she has a medium mark in the middle above her right hand that resembles her alien race and Is shape like a crescent moon. However, the mark is almost the same color as her skin.

Madoka is a smart, caring, friendly and wise girl who is very a little mature for her age. She often stay in her lab to work on experiments and inventions but she realize that staying in her lab all day it not good for her and it was convince by her friends. She mostly goes out on her own searching for samples and stuff that she needs for her inventions and weapons.

Madoka get along with her friends very well but she mostly has a bad temper sometimes when some of them can't focus straight including missions. She also never gets mad at Azmaria because she treated her daughter very well but she doesn't like when people mess with her and hurt her feelings and she tries to defend her. Madoka believe that she wants to make some changes in her life after blowing up her home planet 100 years ago along with her mother and her race. She won't forgive herself on what she did to her home planet and her race and she sometimes having a hard time making tough choices in her life and for her friends that she wants to protect. She is having a hard time on forgetting that tragic moment that she has to deal with in her home planet witch affected her life as she knows it. She and her friends wants to destroy all evil who try to get away with everything they did and she won't stand by from evil who threatens to destroy the planet. However, she also know a good way of working together with friends. Madoka realize that she can do anything in her life instead of destroying galaxies and planets and she wants to put her mind to it on focusing whats coming next for her. Due to her making new friends on planet earth, She finally accepts earth is her new home now.

100 years ago, Madoka has live on a planet called Necrom all her life when she was born. During her early age, she express a love for technology and science and she wanted to create things to make her people much happy and make the planet a better place for everyone in Necrom. However, her mother Vylus saw madoka's inventions when she show it to her. But later, Vylus called it trash and garbage after she destroyed her first invention when she blast it through her hands and she call madoka a embarrassment and a failure for making a invention called the sunlight machine. However, Madoka show Vylus another invention she made called the Mega Blaster 3000 witch turn any objects bigger only. Later, Vylus see what it does and she doesn't like it and called her a completed garbage. So, she blast her second invention and destroy it and ask the guards to lock her up in the dungeon for 3 weeks without any used of her inventions and sciences stuff in the dungeon. Vylus wanted Madoka to stop making inventions and sciences stuff witch she really wanted her to do is to be evil and rule the planet earth and the galaxies with her. later on after Madoka release from her dungeon cell, Madoka wants to try to gain her mother's approval about helping her race and the planet witch Vylus later agree to if Madoka rule the galaxies and planet earth with Vylus. But, Madoka refuse not to twice. Vylus sees the people on planet earth and called them nothing but worms and insects and they should be erase from existence hinting that she plan to destroyed it. However, She still called her own daughter a embarrassment and a failure for not agreeing to her. However, Madoka started to take action and realize that her mother has gone too far of controlling everything in Planet Necrom and treating Madoka as her slave. Madoka hated her mother because she wants to control everything and take on planet earth and other galaxies. Madoka step down and plan to stop her mother and her crew for getting away for destroying planet earth. However, Her mother Vylus and her crew build a giant cannon planning to target earth as her next target because she wants the planet to die for her own choice. Later, Madoka destroys the cannon that Vylus crew made because she believes its unfair for people on earth have to suffer the fate from her race and she wants to keep the peace from other worlds with no destruction and evil. After she destroys that giant cannon, Madoka planning to make an escape from her home planet and set a course to earth in to her escape pod, but later her mother try to stop her by grabbing her leg and forbid her for leaving the planet. She kicked Vylus in the face and started to get in the escape pod as she could. She used the doom day device to blow up her home planet along with her mother Vylus and her own species making her the last of her race. She also believes that she had to destroyed her home planet in case her mother and her crew won't find her because her race has a huge grudge against planet earth and there race.

For not having any type of superpowers and all, Madoka used her natural abilities and her brain by creating weapons, swords, and gears for herself in order to help her friends out on any endangerment occasions such as finding rare stuff and fight stronger foes. However, Madoka don't have that much gadgets in her lab and she mostly invents new ones so she can defend herself and her friends.

Inventions made by Madoka

"ow ow ow ow that hurts."
—When she gets clawed by one of the crabs on her toes and fingers when she try to escape from them.

"Oh no my lab."
—When her lab gets destroyed.
"Everyone i have invented something that can knock your socks off. Wanna see?"
—She tells everyone what did she invented in her lab.
"Ah, this is so relaxing. "
—She relax on the beach.
"Disco. you and Sonny go get the astro emerald in the cave. I'll cover you guys."
—She tells the both of them to get the astro emerald in the cave.
"Geez another fail experiment. Just great. "
—Her inventions fail completely.
"No my boots. they are ruined."
—When her boots gets destroyed by a strong blast.
"If we can try to defeat Dr Eggman and his robots, we need to think of a strategy."
—She's telling Disco, Sonny, and Jin about her plan on defeating Eggman.
"I'm ok Joshua, i just sprain my ankle thats all. OW!"
—She is in pain when she sprain her ankle.
"Thank you my friends. The city is safe at last. Your home is my home now."
—She is thankful for her friends and finally accepts earth is her new home now.
"Well, its Friday morning now. We should get this area clean up."
—Madoka is telling everyone and her friends to clean up half of the city area when it was destroyed by Eggman & his robots.
"Eggman. I'm not gonna let you roboticized Azmaria. I won't let you get away with this."
—She is speaking to Eggman on her computer lab monitor.
"Look, a UFO"
—She warned her friends that she saw a UFO in the sky.
"Nice shot Disco. That was a amazing hit right there."
—She tell's Disco about hitting the volleyball with a great shot while on the beach.
"I will analyze some data on that new airship so I can find out where the entrance is at."
—Madoka tells Disco and Sonny, that she will scan some data to find the entrance in the big airship.
"Uh, guys we got company"
—She warned Disco and Sonny that 12 robots saw them and ready to attack them.
"I may not have any powers like my friends, but I can still kill you with my lazer gun Shio "
—Madoka is about to fight Shio while using one of her inventions.
"Thanks Rex, you really cover me back there."
—Madoka thanking Rex for helping her out on her research.
"Hey Joshua, have you seen my phone anywhere?"
—She ask Joshua if she sees her phone, while she is on the beach.
"Hey. Cut it out, it tickles it tickles it tickles. Ha ha ha ha."
—Madoka got capture and being extremely tickled by one of Eggman's tickled machine.
"Well Joshua, I used to live in a secret warehouse when I first arrive on this planet with a escape pod, but I used to steal some stuff back then in order for me to stay alive and healthy. "
—Madoka tell Joshua that she used to live in a secret warehouse.
"Look i'm really busy here."
—She tell Joshua that she is really busy.
"GET OUT. NOW!!"
—Madoka tell everyone to get out of her lab.
"Hey let go of it. Its not yours."
—She tells one of her foes to let go of the Astro emerald.
"Well, the clothes that i'm wearing right now. I only have three pairs of them."
—She tells Joshua, that she has three pairs of her everyday outfit.

Start a Discussion Discussions about Madoka The Light