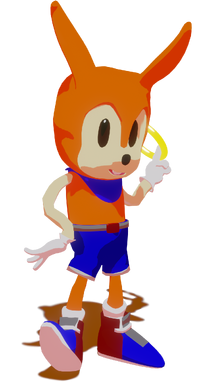 Mach The Rabbit is an Anthropomorphic orange rabbit that has the ability to run at the speed of sound (and maybe beyond) hence his nickname. Mach is very kind and happy-go-lucky, despite his scatterbrained behavior at times, often getting distracted in the middle of battles and conversations.

Mach is a rabbit with orange fur and a light cream colored mussel and arms. His ears are always perched up high and alert. Mach's eyes are small and a bit beady, and the fur around them makes his eyes look like irises in a bigger eye.

His attire consts of a pair blue shorts with a white band around the bottom of the leg, its barely held up by a grey belt with a ruby red buckle. Around his neck is a blue bandana.

His "SUDD" branded High-tops are blue in the front half and a dark red in the back half, The soles and strap are white

Mach is very hyperactive and scatter-brained

Mach's main ability is his speed, unlike Sonic, he can preform a "Super-Peel-out" where he revs his feet like a wheel. being able to easily reach Mach 1 and react to his surroundings at that speed, but Mach is not as fast as Sonic. Mach max speed has been determined to be around Mach 3, unaided.

Mach seems to have limited chaos energy manipulation, being able to harness Ring energy for protection against mortal damage.He can augment his speed with chaos energy, resulting in speeds that his body can not normally handle, sometimes reaching mach 10, But it does require a large amount of rings.When "Boosting" Mach has trouble controlling and seeing due to wind and air resistance, so he tends to go in a straight line, and that can cause various crashes and accidents. so because of numerous events of him crashing into people, buildings, and trees and the fact that he considers this "cheating" when racing,Mach does not like to Boost and will not boost under most circumstances.

His high-tops and has been modified with a material that resembles chameleon skin, this helps him run up walls,ceilings, and preform various free running moves.

Mach's short attention span can result in him getting distracted in battle.

His Boosting abilities can injure him and his Allies more than his foe.

Retrieved from "https://sonicfanon.fandom.com/wiki/Mach_The_Rabbit_(Burst_Universe)?oldid=1864509"
Community content is available under CC-BY-SA unless otherwise noted.