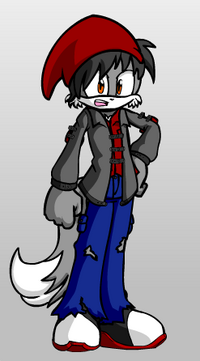 Elias the Wolf (AKA Mantis)

Lysander is a very intelligent boy causing him to be easily annoyed by other people's ignorance. Besides this feature Lysander can be very kind towards his friends and family. Although, Lysander can be rude towards people he dislikes as well, but he quickly learns to respect his foes as well. Lysander is also a very persistant person and does not give up easily which is shown a lot in missions with The Insurrection. Lysander also knows the difference between right and wrong and most of the time chooses the right choice which keeps him away from (or gets him in) trouble.

Lysander was born an only child in a local hospital in the state of Akijan in the country of Eslion. As a child Lysander showed great intelligence already due to his father helping him prepare for school. When Lysander entered kindergarden he met his current best friend, Ray the Cat. Ever since they both have met they have been good friends. When Lysander and Ray got into the 6th grade they met their new friend Scarlett the Hedgehog. In school Lysander usually got straight A's or a few A's and some B's. In 7th grade Lysander signed up for a self-defense class with his family due to the rise of the gang known as The Black Fangs.

When Lysander turned thirteen he asked his father if he could sign up for blade trainings to be able to defend his household. At first his father was reluctant but eventually said yes. By the time he was fourteen he had passed blade training. When Lysander was fifteen he was forced to use his blade skills to defend his home from a Black Fang Pirate. Lysander ended up incapacitating him and letting the government arrest him. Later on the war between the Black Fang and the Eslionian Government had worsened and his father was drafted into the army to protect against the Black Fangs. When Lysander turned sixteen he had learned of a new group of people named The Insurrection who's soul purpose is to bring peace to Eslion and connect Eslion with the outer countries. Weeks after Lysander's sevententh birthday his mother and him learned that his father had died in battle on the island state of Helios. After this Lysander had decided to join The Insurrection to help try prevent any more war from happening in Eslion.

Apart of The Insurrection (Age 17-Present)

Lysander had trained in the art of blade usage when he was thirteen which helped protect his family from a Black Fang home invasion. After joining the Insurrection Lysander was forced to train in other combat styles including gun usage and hand to hand combat. Lysander also has a high intelligence which helps in situations requiring strategy. During the Insurrection's training Lysander also had to learn how to drive multiple vehicles, including cars and planes. Lysander also has a good ear due to him being a wolf.

Lysander's Casual Outfit (Version 1)
Add a photo to this gallery
Retrieved from "https://sonicfanon.fandom.com/wiki/Lysander_the_Wolf_(SteampunkFox001)?oldid=1580572"
Community content is available under CC-BY-SA unless otherwise noted.