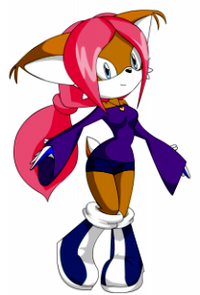 "Am I... created or born with these powers?"
—Lyra talking to Sonic[Author]

Lyra is a lynx with dark pink (at first aqua blue) hair with a ring to control her chaos blast, an aqua skirt(usually shorts). She has extreme power of Psychic, that protects her and heal those who dangers her, or needs help. She is a mixed hybird of a Chaos, a Wisp, and a Lynx, or to be a Chaotix Wisp (made by Dr. Eggman, 7 years ago), but failed cause of the power being too extreme, so he put her in a one his capsules and was ditched to the Great Forest to lay rested.

She is sweet, feisty, and smart lynx that wants to protect and help her friends when ever there is danger, even helps Tails for "The Brains". At first, she was curious and emotional at first when she met Sonic ,then she turned up the power of courage and friendship to her new friends, she will stand up for what is right for Mobius to stop Dr. Eggman.

She was born in Emerald Town, but her mother died while birth, same with Lyra, fortunately she was revived with the mircales, by the chaos emeralds. Living with her father at the age of 4, she was tested for any changes of her energy, but with a single shock her energy levels went up 100% more powerful than one emerald, all of the sudden, Lyra and his father saw the invasion of Dr. Eggman's SWATbots.The robots seize his father while Lyra got a chance to escape to live with Lyra's grandfather, Professor Perry Lynx. Helpless for Lyra to escape to South Island, Dr. Eggman experiment her with parts of a Hyper-go-on Wisp and Chaos, but with the extreme power of both, he ditched the body in the Great Forest until 7 years later.

Her own ability is Chaos Heal, a way to heal others, but not strong enough to heal dark magic wounds. She has a curse of "Snake eyes".It has the power to copycat her opponent's powers use them against them, and even stunn them.

She has the power to use psychokinesis to protect, heal, and even teleport herself without using Chaos Control. Ever she knew about her unknown power to Absorb life with her Vampire touch and leave her enemies weak.

Same power like Shadow of Chaos Blast, but needed to remove her ring in the back of her hair to make process, this power of the aftershock is too extreme then Shadow's Chaos Blast. And finally, she can summon her own psychic weapons to fight enemies what their weak spot is.

At what is different about her is, she wears and became the Power of a Spirit, with powers of a Spirit Guardian and a Spirit Healer. Lyra upgraded her way of life, now she became immortal, but still weak against Black, or Dark magic.With the Power of the Spirit: her powers are Revive, Energy Spear, Elemental Punch, Elemental Powers, and Psychic Blood (bloodblending).

Even though you see that Lyra is strong, but her own personal weakness is harming anyone she knows that becomes her enemy. And because she's Psychic, she is weak against Dark magic and Ghosts.

'Visit Lyra Wisp and Sonic 'on a New Adventures:

Retrieved from "https://sonicfanon.fandom.com/wiki/Lyra_Wisp_Lynx?oldid=1487693"
Community content is available under CC-BY-SA unless otherwise noted.