Start a Wiki
This is an article about Lynette, a character created by Mr.gameandfight on 11/11/2015.

"Well if it isn't my old monkey friend being helpless as usual~!"
—Lynette to Rik 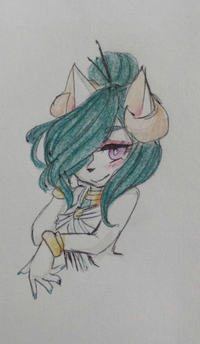 Lynette Eliades, The Melody of Silver Ocean or commonly referred to as Lynette is a Siren from the series Circles of Fate. She accompanies Rik as his individual spirit on his adventures and acts as a guide or ally for him. She is also the older sister to Elise.

As a siren, Lynette is a very beautiful spirit with blue hair held together by two small chopsticks, light mascara on her eyelashes, Red foundation makeup on her upper eyelids, white fur, purple eyes and small horns. She wears a small toga accompanied by golden accessories and sandals.

She also has black wings on her lower back that mysteriously reflect rays of light that get on them. And unlike others, Lynette has two different tails rather than one. She finally has two swirled tattoos that are located on her chest and her left forearm.

Rik and Lynette
Add a photo to this gallery

Lynette is a rather brash Siren. A perfect example would be her personality towards Rik as she calls him names such as "Monkey-Man", "Banana Skin" or "Truffle Boy". Lynette also is heavily motivated by her own personal liking to grant answers or help in an insignificant situation such as being told by the user (Mainly Rik) to give her chocolate truffles or run her a bath. It mainly shows how extremely dominant she likes to be without consideration for what other people think of her actions. Fully knowing the after effect to bribing someone for a certain issue, she is mostly remaining neutral to any threat or insult given to her. Lynette also seems to be an extremely dramatic and over reactive individual shedding tears or becoming enraged on insignificant things that shouldn't be an issue.

Though she appears to be overprotective of her sister when a majority of her time is to cooking for her and making sure her chores and tasks have been completed.

However Lynette Appears to have a serious side that heavily contrasts her casual mood. She's extremely quick to give useful advice or call someone from their actually names rather than create one to insult them.

Lynette is the spirit to Rik which ultimately make them allies and teammates. However, dues to their differing personalities,the two tend to not see eye to eye when put in certain situations. She often tends to make her host often irritated or angry by calling him various names and insults. Though she has been known to deeply care about him especially faced with extreme situations and can create extremely powerful abilities or game-breaking strategies.

Elise is the younger sister to Lynette and is the only person to always share her true caring personality to. As being the older sister, she acts more of a mother figure to her sister and is casually seen making dinner and running baths for her. Though due to her personality, she can be quite bothersome because of her obsessions with bathing and chocolate.

As a Harmonic Spirit, Lynette's capabilities are extremely powerful. Given her name being the melody of the silver ocean, She can be able to make her wings change the density to be as hard as silver. But her main ability focuses on using her harmonic abilities to summon water. She also has the ability to change and alter the temperature to any water placed in front of her as well as manipulate it to her own will. She also has the ability to Manipulate Ice thanks to the Pact made with Rik (Albeit Rik cannot benefit from Lynette's Hydrokinesis).

Lynette also has the ability to enter and exit the astral and physical planes of reality by vanishing and reappearing if she chooses to.

As her name and species implies, Lynette has a very Impeccable singing voice that brings attention to the beings and creatures to Authenia.

As a Hydrokinetic User, Lynette's abilities are outclassed by natural weaknesses such as Fire turning water into vapor, being susceptible to Electricity and Sand users absorbing moisture. Also while being her only strong point to negate magic and summon water by her voice of song, should she be silenced by any means, she will have no choice but to retreat. Her Cockiness and Ego also come out more than any situation faced and can lead her into trouble. And while gaining Rik's abilities through their pact, she is also susceptible to his cryokinetic weaknesses.

Retrieved from "https://sonicfanon.fandom.com/wiki/Lynette?oldid=1685844"
Community content is available under CC-BY-SA unless otherwise noted.