Note: This character exists outside the canon of The Legend of Fox the Brave!

Lynel Crash is a character created for the Pokémobius: Chaos RP made by Austin Bison

How could you! I trusted you and you betrayed me! You betrayed everyone who got mutated! 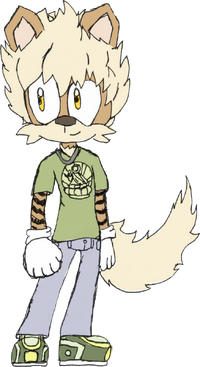 A drawing of Lynel, made by Austin Bison

Lynel is a Mobian Arcanine, but due to a strange mutation, is a Normal-Type instead of Fire, and thus his appearance is a bit different. He is around 6' tall, and though he maintains the thick mane and tail of a typical Arcanine, is more pale brown in color, with a paler mane and tail, amber eyes and black stripes. Primarily living on the edge of civilization, he mainly just wears a t-shirt, jeans, and simple sneakers. When it comes to fighting, Lynel likes to get "hands-on" and use his strength, which leaves him at a disadvantage when it comes to faster opponents.

Possibly due to his past status as a Fire-Type, Lynel is rather hot-tempered in a manner similar to the current Austin Smith of The Legend of Fox the Brave, leading to him constantly clashing with calmer individuals, especially if he finds anything wrong or thinks someone "looked at him funny". This also leaves him in stark contrast to the calm thinker Boulder. While not dumb, he may be perceived as a bit dim sometimes.

This makes him similar to Fox the Brave in terms of temper, as the red fox could often be either cold and harsh or very hot-tempered and quick to anger.

Originally a regular citizen, Lynel was, in essence, friendly rivals with a Dusk Lycanroc by the name of Boulder, partly because their different temperaments would occasionally cause arguments and thus a fight, though it was all in good fun. However, when Lynel was mutated, the people quickly turned on him and forcibly relocated him, even against the wishes of Boulder, the sensible Lycanroc who didn't see much wrong in the changes. Angry at this, Lynel ran away, and became aggressive towards those unaffected by the mutation, notably Boulder, whom he believes did nothing to stop the people from throwing him out. This has led to him clashing with several non-mutated Pokemon, Boulder once again being his most common adversary.

Due to his large size, Lynel leans a little too much on his physical strength, commonly ramming others or trying to tackle them to the ground; this gives him a disadvantage against faster opponents, or those who can utilize "negative priority" moves such as Counter or Dragon Tail.

Retrieved from "https://sonicfanon.fandom.com/wiki/Lynel_Crash_the_Arcanine?oldid=1831896"
Community content is available under CC-BY-SA unless otherwise noted.