Start a Wiki
This is an article about Lyn Salazar, a character created by CrimsonFlame2K on 11/10/2017. 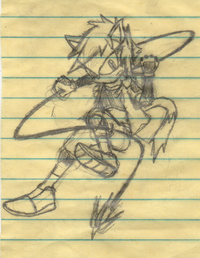 I'm not making the same mistake twice, dammit. I'm taking you down, even if it's the last thing I do!

— Lyn upon encountering Infinite, Rage Against the Empire

The world she’s known and loved her whole life is on the brink of total destruction. With nothing else to lose, Lyn Salazar joins the Rebellion of Blue and help win the world's freedom back! Lyn serves as one of the main protagonists of Rage Against the Empire alongside a 16-year-old Whirlwind Reyes. However, things are never as easy as they look, and one wrong move could spell her doom...

Lyn is a female Mobian cat that stands at around four feet and three inches tall and sports a fairly-lean physical build for a girl of her age. She bears large tufts of fur on each side of the back of her head, and smaller tufts of fur right at the tips of her ears. Much of the fur on her body is colored with a slightly-dark shade of red, while a large streak on her forehead and the tips of her ears sport a medium shade of violet red. Meanwhile, the skin on her muzzle, torso, and inner ears bear a light tan coloration, and the irises of her eyes take on a slight deep shade of green in coloration.

Her outfit initially consists of a purple short-sleeved jacket with inner linings and collar that sport a lighter hue of purple, and a plain white tank top underneath it. Around her legs, she dons a pair of dark blue denim shorts, and a pair of black leggings that reach past her knee underneath them. She also sports pair of white gloves with sock cuffs around her hands, a black leather belt around her waist, and a pair of light grey sneakers with white toes on her feet. A golden necklace with a pendant sporting a “winged cross” design can be seen around her neck, though it is fairly easy to miss.

Shortly after her first mission as a member of the Rebellion of Blue, however, she dons some chest armor plating on top of her tank top. She also switches to a pair of white fingerless gloves with metallic plating on their backs and a set of metallic studs around the knuckles. Additional pieces of armor plating are also attached around her jacket, and a set of metallic pads can be seen on her elbows and knees. She also sports an eye piece with a purple lens on the left side of her head.

Lyn can be best described as a rather hot-blooded and passionate girl, to put it lightly. She is often seen acting rather headstrong and reckless, often reacting violently towards situations that she finds unpleasant and not to her liking. Mostly because of her young age, Lyn is also somewhat naive, as she sometimes shows somewhat poor judgment in her actions and her words, especially during some of her earlier missions. She also sometimes finds herself in situations where she needed to be bailed out by someone else.

Despite all this, Lyn does possess an incredibly strong sense of justice, having joined the Rebellion of Blue to contribute in their efforts to take down the Eggman Empire and free Mobius of its rule. In fact, Lyn is usually one of the first to spring into action in most missions she partakes in, which may also be related to her headstrong nature. In combat, however, she is very pragmatic and will use just about every trick she knows to win a fight, including playfully taunting her foes, which she does very often. She is also notable for sporting a will of iron, rarely backing down from a fight even when the going gets rough.

It should be noted, however, that Lyn does sport a softer side. In spite of her tendency to act without thinking, she does show concern about her comrades and friends. In particular, she herself has stated that she constantly worries for Whirlwind, especially in regards “how much he’s changed ever since [the Eggman Empire] ravaged their home”. Despite her hot-blooded tendencies, she is also quick to see to her comrades if ever they get hurt and easily becomes guilt-ridden if ever she finds herself unable to come to a friend’s aid or realizes if she has made a grave mistake.

Lyn is also not above feeling fear and anxiety, though it is often masked by her impulsiveness and determination. It is only at its most noticeable during her encounters with Infinite, however.

Lyn possesses no notable special powers, aside from her admittedly-useful ability to detect the presence of a person through their energy signature, whether it be ki, Chaos Energy, or even the strange energy that Infinite exudes. Meanwhile, she does sport an above-average level of speed and agility. In particular, she is capable of moving at speeds that allow her to keep up with Sonic himself - if only slightly, and sports acrobatic skills that can potentially rival the blue hedgehog’s as well.

She is impressively dexterous with her hands, which - along with her pinpoint accuracy - make her especially skilled with the use of the groups' tools. With her the grappling hook on her wrist-mounted Multi-Functional Operations Tool, a standard-issue gadget for most soldiers in the resistance, she can latch onto her targets and fly through the air with relative ease. Lyn can also reel herself or her foes in before landing a striking blow and evade the enemy by pulling herself to any ledge the wire can reach, proving the tool to be especially versatile. The tool also comes in handy when dealing with larger threats, as Lyn can safely tie them up with the rope, immobilizing them.

While not nearly as physically powerful as Whirlwind or Knuckles, Lyn does sport a respectable level of skill in martial arts. This means she is far from helpless if ever she needs to defend herself from threats that opt for an “up-close and personal” approach. Combined with her pragmatism, Lyn can potentially become a dangerous fighter if she plays her cards right. She makes better use of this skill in combat after equipping a pair of shortswords emitting a field of Chaos Energy in majority of her later operations as part of the Rebellion, allowing her to easily cut through enemy forces herself.

As a member of the Resistance, Lyn carries the following whenever she participates in missions.

Attack: 5 - Lyn won’t be winning any lifting competitions anytime soon, but she is capable of duking it out with her fists and feet when the need arises.

Defense: 4 - She isn’t particularly tough and, if it weren’t for her indomitable will, can be taken down rather easily.

Speed: 8 - Lyn is actually quite fast on her feet and can cover distances at speeds that can potentially rival that of the Blue Blur himself.

Magic: 1 - Lyn possesses nothing beyond the ability to sense one's energy signature when it comes to special abilities or powers.

Evasion: 7 - Her agility and reflexes are quite impressive, meaning she can easily dodge most attacks that come her way.

Intelligence: 7 - Lyn is quite good at coming up with clever schemes and outsmarting her foes in a fight, in spite of her impulsiveness and hotheaded nature.

Skills: 8 - Her overall skill in combat - whether it be through martial arts or through her twin shortswords - is quite impressive, and her acrobatics, on top of her penchant for combat pragmatism, definitely make up for her lack of supernatural powers.

Accuracy: 8 - Lyn’s accuracy is quite deadly, meaning she makes her mark with her tools quite frequently.

Stamina: 7 - Having built up such an impressive skill with acrobatics and being athletic has made Lyn capable of keeping herself in a fight for a while.

Tolerance: 5 - Lyn is susceptible to the same amount of pain as any average Mobian.

In comparison to the rest of the cast, Lyn’s physical strength is not all that impressive. Naturally, this means she cannot defeat her foes by overpowering them, which is where her pragmatic approach to several of her fights stems from. On top of that, Lyn is still an average Mobian despite all her impressive skill with gadgets, meaning she can still feel as much pain as anyone else if ever she does get hurt.

Lyn’s iron will can only take her so far, generally speaking. Even though it has helped her survive some truly dire situations, it can also prove to be a detriment in some situations where making a strategic withdrawal would be the better option. Combined with her hotheaded nature, Lyn can be far too careless with her actions for her own good.

A rough sketch for the lass herself I made while in class.
Add a photo to this gallery

Retrieved from "https://sonicfanon.fandom.com/wiki/Lyn_Salazar?oldid=1857086"
Community content is available under CC-BY-SA unless otherwise noted.