Start a Wiki
This is an article about Lymbii Axom, a character created by Frozen Scorpio on 03/1/2015. 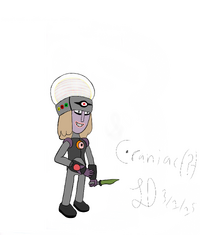 Lymbii is a cyborg human with light-purple genetic skin and synthetic gray skin. On top of his head is a cranium-like machine that acts as a mechanical brain, this having a distinct eye pattern on the front, with RGB cables on the right side and several HDMI and USB ports on the left. In the middle of his chest lies his emblem, a blood-shot eye with multiple branching, bright-red veins throughout. From this droops his (not synthetic) light-brown hair.  Lymbii's eyes are more sharp than most others, his nose has a more rectangular shape, and his lips are considerably more puffier than average.

Due to previous events, most of Lymbii's body has been converted to machine in order for him to survive. Dark violet hands and shouders, as well as dark gray gauntlets/torso-piece, and curved, cubic feet make up the important parts of his body, the rest being a basic shade of gray.

Lymbii is kind of a hard nut to crack. He borders on being both too intelligent and too incompetent for his own good, with him having many great POTENTIAL ideas, most of which failing in execution as he never really thinks these ideas out unless they pertain to his interests in some way. Lymbii is also somewhat trigger-happy, as whenever given the chance to use a weapon, Lymbii will always go full-force on whatever the target may be, even when a child could determine that it would be a waste.

Lymbii was raised in a well-established manor, sheltered from the outside world by his adoptive father Kofirus Axom. He raised Lymbii to be essentially another him, treating Lymbii how his parents once treated him. Lymbii feared making mistakes, as this often led to harsh, and sometimes violent, punishments that left Lymbii hiding in his father's shadow for most of his young life. Lymbii never really made any friends during his childhood, as his father never let him into the outside world. Upon reaching an age where he began to think for himself, Lymbii decided that he was not going to have any more of this abusive home-life, and left.

On the lam, Lymbii had to endure extremely hard times. With no food or shelter, he often had to resort to stealing or eating garbage just to survive. Harsh Summers seared his skin and freezing Winters numbed his soul, until one day, Lymbii finally found temporary solidarity in a small cult called the "Legacy of Shadows." Here, he was treated as an equal among his peers and had quickly made many friends who empathized with him, making him finally feel inner peace at last.

But then came time for the cults "activities." As it turned out, the Legacy of Shadows were a group of poor, homeless people of nearly hundreds of different backgrounds, tired of being treated as below-underclassmen by society and being considered nothing more than "dirty animals" by the media, and decided to take drastic measures in order to achieve their goals. The group set fire to many high-profile corporate stores, business buildings, and factories, sometimes with workers/civilians locked inside. Lymbii was always tasked with scouting out and determining what the ideal spots for breaking in and setting the explosives were, being dubbed "Craniac" by his peers for his excellence in this field. He felt remorse in these actions for some time, but, in order to stay in the only source of happiness he had, Lymbii hid these feelings deep inside of him, so far that almost he couldn't feel them.

As all good things do, Lymbii's time was eventually brought to an end. After a failed attempt at burning down EQuartz (long before the rule of Jared, mind you) Lymbii was imprisoned along with his fellow members and were all sentenced to public execution. The Legacy's deaths were quick and unmemorable, Lymbii's included, as he was just too afraid of death to truly speak his mind.

After death, memories of Lymbii were quickly forgotten, causing him to fall prey to the Void of Memory. He entered at an early state in the merging, with there being not much extra debris around, most of it being used to recreate the world after Sartorius' fusion with the Void Orb. Lymbii had become quickly assimilated with Vhan, with his remaining life-force being leeched out by the ravenous former-human. What seemed like a few minutes of agony quickly expanded into several months, then becoming years of being slowly consumed by the Void's god.

As if the void itself was lashing out at it's god, a wave of negative energy struck Sartorius, creating a massive slit in it's body that allowed a few beings to escape. Lymbii was one of these few, who was attacked by Vhan on his way out, having had a small portion of Sartorius' soul implanted into him. What remained of Lymbii's body from the attack (a head with no scalp, some hair samples, and a few bones with bits of skin on them) was quickly found and hauled away by a cyborg mouse named Trip, who would revive Lymbii as a cyborg to serve EQuartz as part of a deal with ruler Jared Infiern.

As enough of Lymbii's brain was salvaged, his consciousness remained in this new form, though a new prescence was growing inside of him, this being the fragment of Vhan's soul that was beginning to replicate it's previous form without Lymbii even knowing. Through this, Lymbii became an unaware spy for Sartorius, acting as a vessel for it to see the world without an Astral Projection and even spreading it's influence throughout.

As part of EQuartz, Lymbii had become the President of Celebrations Planning. Here, he had bonded with many new people and found a new source of happiness, almost completely ridding himself of his former times with the LoC. Unfortunately, Lymbii truly has no idea what he is really doing, becoming a simple pawn in Sartorius' plans for world-assimilation.

Lymbii, due to the mechanical modifications added to him, has gained the power to create projections with the mechanical dome on his head. These often come in the form of holograms, which can range from plans and layouts of a given area to copies of himself to psyche out opponents. Lymbii also has minor electrokinesis, giving him the ability to fire minor electric shots that can paralyze an opponent. By connecting the proper cables to the holes on his head, Lymbii can be used as a portable moniter for all of your personal or work-based needs.

From interactions with Sartorius Vhan, Lymbii has become it's unaware vessel in the world around him, which also bled into another part about Lymbii, where everything he touches becomes linked to Sartorius Vhan, allowing the beast to slowly consume that person or object from within, leaving them an empty shell to act as just another vessel, creating an endless cycle that will eventually swallow up the very world itself.

From the mechanical modifications made to his organic parts, Lymbii can do a variety of things to help one survive in certain situations. His eyes can create weak beams of light to guide the way in darkness, similar to a flashlight. His fingers can dispel weak fire for starting campfires and lighting torches, making him also a walking lighter. His arms can be easily detached and re-attached with little issue, so long as there is not much between them blocking the connection.

Lymbii, due to being part machine, has many restrictions that keep him below the highly-powerful. He has a certain limit of how much of his power can be used before overheating and shutting down, requiring that he cools down and gets repaired before being properly active again. If water gets into the holes in his head, Lymbii will short out and unleash a powerful wave of electricity, greatly damaging him as well as anyone that gets hit by this. For whatever reason, Lymbii cannot hold his breath for very long, making him constantly have to catch his breath after moving somewhat-short distances.

Retrieved from "https://sonicfanon.fandom.com/wiki/Lymbii_Axom?oldid=1630809"
Community content is available under CC-BY-SA unless otherwise noted.