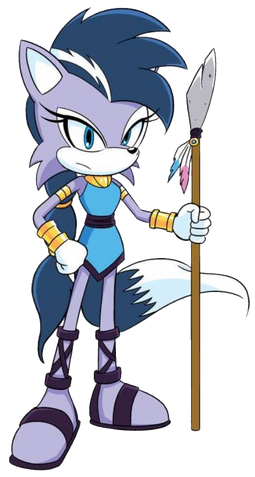 
Her people and home
Sonic, Sally and their friends

Lupe the Wolf is a character that appears in the Marshalia13 Universe. She is a mobian wolf and ally to the Freedom Fighters. After being caught up in Dr. Eggman's attack on her village when she was younger, she was inspired by the heroism of Sally Acorn to fight back against the diabolical doctor.

Lupe is a tall, gray mobian wolf with dark gray fur, except for her tail which is black with a white tip, blue eyes, and a single scar under her left eye. She has small cheek tuffs and her hair is somewhat spiky and mohawk-like, featuring a white streak, and is always bound in a braid. For attire, she wears a blue with a tribal dress and dark lining that ties around the neck with a gold ring, and black sandals. She, like the rest of the characters, wears gloves. Her wrists and upper arms are adorned with gold cuffs.

Lupe is a kind and sage-minded individual, but her peaceful exterior hides a real warrior. She is very intelligent, cooperative, and knows how to strategize. Her loyalty makes her an excellent role model and ally thanks to Sally, Sonic, and the Freedom Fighters. She is likewise protective of her home and her people.

Just by looking at her and seeing the way she behaves, one can be certain that Lupe is very trustworthy. However, she is definitely no one to tangle with if the Eggman Empire tries to attack her homeland.

At some point in the past, Lupe was caught in the invasion of her village by Dr. Eggman and his forces. Thankfully, Sonic the Hedgehog, Sally Acorn and Antoine D'Coolette of the Freedom Fighters came to her aid, and their heroism, along with the pain of losing her father during the invasion, gave her the drive to fight back.

Lupe is a skilled fighter who's weapon of choice is a spear. She also has a skill for leadership.

Retrieved from "https://sonicfanon.fandom.com/wiki/Lupe_the_Wolf/Marshalia13%27s_Universe?oldid=1787099"
Community content is available under CC-BY-SA unless otherwise noted.