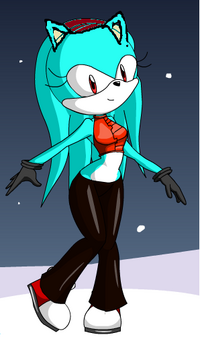 Lumi is Cyan Cat with dark red hair band. She also uses a pilot hat sometimes. She also has small red T-shirt, black jeans, black gloves and red shoes. The clothing may be tight, but she still uses it at frost without catching the cold. Her ice powers makes sure of that.

Lumi is enthusiastic, hopeful and joyful Cat lady, who is also really emotional girl. It explains also the thing, why she can't stand death of innocent people. Lumi is known also to love children, so she has also caring heart.

Lumi has ability to control ice. She lives for cold, until she met Marian, who eliminated her Strength to live in cold. In fact, Lumi is satisfacted for this result, since hot temperature made same thing as cold for regular human.

A Pisces necklace From Marian: mainly for Lumi's natural obsession to fish

Lumi is a Frenchfinnish Cat. She is born in the Finland, but her father is from France. Her dream has been to get into Paris some day and visit her father again

Lumi doesn't fight for her hobby. Instead, she loves peace and now as a mother she wants to do her best with her child. She is more concentrated to live normal life, but still she will face many dangers along her.

Lumi is really sensitive and emotional girl. She likes treatment, such as petting, rubbing back, massaging, stroking etc.

She is raised by Blaze the Cat. As a legacy, Lumi got a powers. She was supposed to get fire powers as her mother has, but she ended to get ice powers relating to her untitled father's coldness on his old times. The father now lives in Lyon, France. Lumi and her father are still in the phone contact

Lumi has only one form called pet form. She turns into pet Cat, when she is treated like a regular Cat.. Her  active petter is Princess Rose lynn Rose. Lumi sometimes even seeks someone gentle human, who has heart to pet her.

After few years, Lumi met Nora, who turned a new leaf in Lumi's life by showing a mysterious blue cat, which made Lumi to meet that Cat.

Later, she met this Cat, who was called Marian. It was love at the first sight. After a few weeks, Marian asked how far Lumi wants to continue their relationship. They ended up to marriage.

They have got a girl and are raising her.

The time, when Lumi and Marian got their child, Jezreal

The day, when Marian suggests marriage with Lumi

Lumi seeing Marian's holograph. The next day she went to meet him 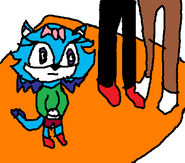 Lumi's and Marian's raised child called Jezreal in an age of 7.

Picture made by Nitrogen218 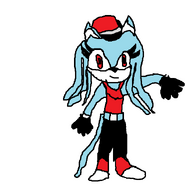 Lumi's new design drawn by MegaPhantaze and designed by Nitrogen218

Lumi's name comes from the Finnish language and means snow.