"Why, I happen to be the owner of that white sedan! Say, what's a sedan?"
—Lucky making a reference, which is typical with her. 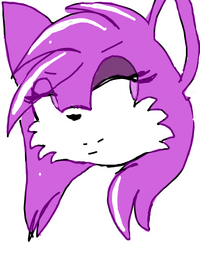 Lucille "Lucky" T. Vulpes, otherwise known as Lucky​ the Fox​​​, is a member of the Trolls; she is a recolor of Tails.

Lucky is an annoying vixen and is incredibly stupid, due to being accidentally dropped on the head by her mother as a young kit. Unlike her counterpart Tails, she's more of a brawn rather than a brain. Despite being a complete and utter imbecile, she has her moments of intelligence and wisdom, though they are seldom seen. Like Rouge, she's a flirtatious minx. She is a very talkative vixen, often babbling about her interests. She doesn't seem to mind being insulted and physically abused by other Trolls, most likely due to her low intelligence. She attempts to be seductive, but most males reject her, due to her laughable stupidity and unattractive features.

Lucky is Shadow's (self-proclaimed) number one fangirl. She adores Shadow, but Shadow resents her and would do anything to get away from her. One time Lucky even kissed Shadow and almost got killed by him. Their relationship is obviously one-sided, but Lucky, being as stupid as she is, wouldn't realize that fact if the world was ending.

Lucky was born on the first of May, but was dropped on the head by her mother on accident. As a kid, she annoyed her parents every hour a day. This eventually led to them taking her to an orphanage, where she stayed for twleve years until a duck with Aspergers Syndrome adopted her. He was a bit annoyed with Lucky, but somehow, he could stand her while retaining his sanity at the same time. She became Shadow's fangirl and annoyed him like hell. She joined the Trolls just cause she thought it would be fun. Lucky became a smoker and a drinker because she thought it "Tasted goood!", as she put it in her own words. (improvements in process...)

Lucky is a fuchsia Tails recolor with lighter, pink eyes. Despite being a twenty-one year old woman, she has the appaerance of an eight year old child; this is why her appearance is shunned by most. Unlike Tails, though, she wears purple eyeshadow, has visible eyelashes, and bears long locks to make her look more feminine. She has no visible breasts, which led to one of her nicknames, "flat-chested". She has some curves, but this does not make her more attractive, despite that. She wears typical white gloves resembling Sonic's trademark gloves. Her shoes are Tails' shoes, but recolored blue. Occasionally, she wears a blue skirt. 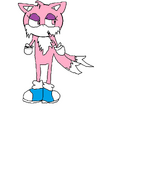 Lucky made on paint.

A quick sketch by the creator. 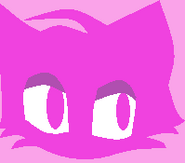 A banner thingy made by the creator on MS Paint.

A headshot sketch of Lucky's current design. (and yes, it's drawn by the creator)
Add a photo to this gallery
Retrieved from "https://sonicfanon.fandom.com/wiki/Lucky_the_Fox?oldid=1794905"
Community content is available under CC-BY-SA unless otherwise noted.