Start a Wiki
This page is not completed and is still being written! 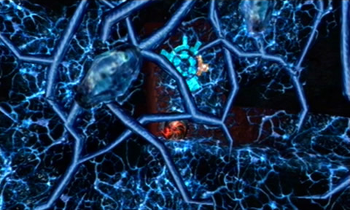 Disease was one of the first Obsidians created, along with his twin brother, Corruption, by Cubia the Hidden One, a deity of the universe and creator of the Obsidians. Corruption left his brother to fight against the Obsidians mortal enemy and prey, the Litemons, and left Disease alone with Cubia. Hundreds of year later, the Obsidians captured some Litemons for experiaments, Disease took the strongest Litemon they captured, a female named _______, as his host and named himself Lucifer. He quickly destroyed the host's soul so he can have absolute control over the body. Lucifer decided that with his new body, he was best suited with spying and assassination but years later, the Litemon body started getting tainted with Obsidian energy and got darker in color, forcing Lucifer to join the front lines. 500 years before current time, the Obsidians and their creator disappeared. Lucifer never did find his twin brother, so he decided to help the Cursed Wave in research and conquering worlds, as his master told him to do. Now he arrives to Mobius/Earth, sensing his brother here.

﻿﻿He is very obsessive of searching for his brother, his reasons are unknown. He has become feminine over the many years due to being in a girl's body. When undercovered, he would act somewhat tomboyish.

Retrieved from "https://sonicfanon.fandom.com/wiki/Lucifer_the_Obsidian_Disease?oldid=1871974"
Community content is available under CC-BY-SA unless otherwise noted.