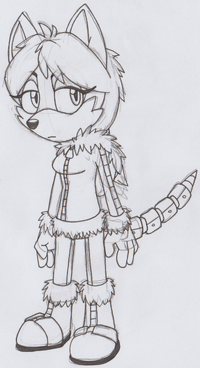 Lotte the Husky (pronounced "LAW-tə") is a member of the Artika Egg Army, and serves under Artika Sub-Boss Ivory the Leopard of the Subzero Glacier Egg Base.

A husky of average build who stands a fair bit over three feet tall, Lotte has a somewhat short muzzle with a triangular nose, medium-sized, triangular ears that stand upright, and a Cyberized tail.

Her fur is primarily iceberg in color, with a white muzzle, eye markings, inner ears, chest, stomach, and forearms; her Cyberized tail is also iceberg in color. Her hair, which hangs back in a loose ponytail, is iced tea in color, and her eyes are imperial purple in color.

Lotte wears the standard Artika Egg Soldier fatigues, which consists of a bright navy blue parka that has white stripes down the arms and faux-fur trim in the hood, sleeve cuffs, and hem, as well as white gloves, black pants, and charcoal-colored boots that also have faux-fur trim cuffs.

Lotte isn't really a specialist in any sense of the word; she's decently strong and quite fast, but doesn't really have the physical strength (or the desire) to be a formidable-enough melee combatant. She does carry a laser rifle with her for protection, but she's not an exceptional shot with it.

However, her true prowess comes in the form of her mechanical knowledge; she's an admirable repairwoman, and does most of the work maintaining the vehicles kept at the Subzero Glacier Egg Base. She's been known to make modifications of such quality that her work has gotten the attention of Dr. Eggman; the head mechanic over at the Arctic Shores Egg Base was, in fact, trained by Lotte.

Being a canine, Lotte has a keen sense of both hearing and smell; she also has sharp teeth and a strong jaw, allowing her to deliver a punishing bite if she needs to. Her Cyberized tail is quite strong, and can easily knock the wind out of a person with one good strike; it can also extend to wrap around an opponent to restrain them.

Lotte is capable of basic cryokinesis, and primarily uses low-tier and simple to wield techniques of the Ice Element, such as Ice Shard and Ice Punch.

The Extreme Gear that Lotte predominantly uses to get around in snow-heavy regions.

Lotte is fairly resistant to the Elements of Water and Ice. She is quite fast, and can easily outpace slower foes and evade their attacks. Her thick fur also gives her great protection against both the cold and against weak, Ice-aligned attacks.

Lotte is weak to the Elements of Fire and Earth. Her defenses aren't anything special, therefore she mostly relies on her agility to try and evade potentially devastating attacks. Being a manipulator of Ice, severe ambient heat can render her powers nigh useless. Her thick fur also leaves her rather prone to heat exhaustion.

Her passive nature makes it easy for people to scare her out/away of a fight, and her nyctophobia (phobia of darkness) can easily force her into an anxiety attack, incapacitating her.

Lotte's generally a quiet and reserved woman, not one for long conversations or hanging around large groups of people (even if she knows said people well); she prefers her workstation in the garage, tinkering and repairing, and even carrying out new projects to help out the base when she has the time and resources.

In conversation, she tends to use few words, and her voice is often quiet (to the point where she's sometimes asked to speak up). She doesn't emote very heavily, either, and it can sometimes be hard to determine her overall mood; its usually safe to assume that she's calm, however, as she's a highly patient person with a very slow temper.

Lotte can be considered overly passive, however, and she doesn't enjoy getting into fights; if cornered, she'll almost always try to simply flee, and only attempt to disable the opponent (usually with a Tail Smash) if she has no other choice. She also has a severe phobia of darkness; being confronted with her phobia is a guaranteed way to give her an anxiety attack.

Retrieved from "https://sonicfanon.fandom.com/wiki/Lotte_the_Husky?oldid=1868890"
Community content is available under CC-BY-SA unless otherwise noted.