Longmire the Cat is a character who appears in The Legend of Fox the Brave. He is a Mobian white cat born in SlugTerra. However, he was recruited by Fox the Brave to join the Storm Fighters, and went with him. Currently, he is a warrior of the Storm Fighters living in Alola in exile with other refugees, due to the spread of the Metal Virus 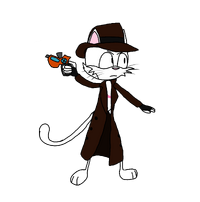 Longmire is a tall cat with thick white fur, and blue eyes. He has a long scar on his belly, and wears a brown fedora, overcoat, and black fingerless gloves. He also wears a belt on which his blaster hangs when not in use.

Longmire is stubborn, fiercely loyal, and has a dry, sarcastic sense of humor. Despite this, he is a calm, friendly person. He is welcoming to newcomers, but wary around strangers, and protective of kids

The Legend Begins: Longmire is found by Fox and Cori, practicing his aim with his blaster. Fox sees this and recruits him into the Storm Fighters, where he remains for the rest of the series. 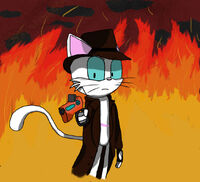 Longmire's weaknesses are unknown, though it's possible he finds it hard to hide due to his white fur. Longmire feels insecure without his hat and coat, revealing that they are gifts from his deceased father and that they once belonged to Cloud

Longmire is half-Mobian, as his father is from Mobius

Retrieved from "https://sonicfanon.fandom.com/wiki/Longmire_the_Cat?oldid=1864352"
Community content is available under CC-BY-SA unless otherwise noted.