Your path was never an easy one. I'm sorry you had to suffer so much, my friend.

— Locke to Austin, Rise of a Leader

Locke is a male Mobian Echidna and a former Guardian who made a few appearances in The Legend of Fox the Brave. He is possibly best known for being the father of Knuckles and being the Guardian before him. In Archie Sonic the Hedgehog Issue 184(and subsequently The War of Time and Storm's War), Locke sacrificed his life to save his son from Dr. Finitevus' plans. As of Austin's Flight, it was confirmed that Locke is a Spirit. 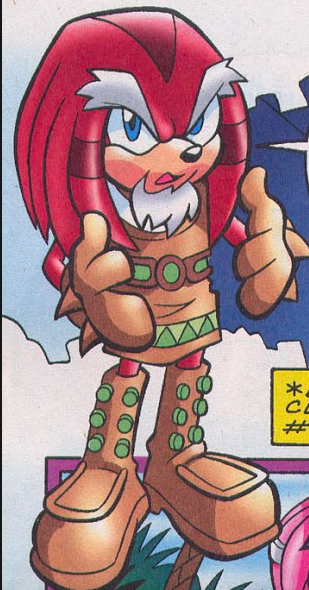 Locke retains his appearance from the Sonic the Hedgehog Archie comics released in the US.

Locke retains his personality from the Sonic the Hedgehog Archie comics released in the US.

As depicted in The Legend of Fox the Brave, Locke is stern and doesn't display much emotion. He does appear to care about Austin Smith, admitting to Storm that he and E.J. hid the warning about the young brown-and-black warrior's arrival from him because they didn't want him to worry about it on top of Finitevus' plans. As he would later admit to Austin himself, Locke would come to regret this, as it caused Austin so much pain.

Before the Series: Unknown, though it's likely his past is the same as in the Archie Comics.

Return of the Werehog: E.J., along with Locke, receive a warning about Austin's arrival from Master Y. Afterward, they choose to keep it hidden until Austin finds out about it himself-unaware this would badly shake Austin's faith in the Spirits in the Stars and ultimately lead to him losing faith entirely.

Austin's Adventures: Locke is relatively minor in this story. After Austin manages to get his bothersome shorts off and runs away from Finitevus for the first time, Locke offers to take Austin to the Storming Base-leaving Knuckles in charge of the Master Emerald-and Austin accepts. When Austin meets Finitevus in the Lamarkie Forest for the first time, he insists that Locke is going to take him to the Base, and runs back to the makeshift camp, frightened. After Austin is taken to the Base, Fox dismisses the Guardian, and he leaves.

A Brother's Search: Locke is given a couple brief mentions. First, he is mentioned by the female Echidna who took in Austin following his arrival to the Four Worlds. He is said to have taken Austin somewhere, but to have refused to say anything else. Later, when Michael Smith visits the Red Fox Pack seeking answers as to his brother's whereabouts, Firestorm, the leader, states that he doesn't know where Austin is, but that Locke might know, promising to take the young loner to visit him tomorrow. Later, he is mentioned by an unnamed, scar-faced Greninja to have taken Austin to The Storming Base, and the Greninja points Michael in the right direction, thanked for his help.

The War of Time: Locke is mentioned when Fox states that the Guardian would still be allowed to work with the Alliance following the Battle of Angel Island. Cori unhappily states that Locke was gone, enraging Fox even more.

Storm's War: Locke is seen during the fight on the Shrine Isle. After Finitevus practically punches Austin in the face, injuring his eye, the mad doctor goes to attack the Guardian, and Storm notes that he didn't really know the Guardian.

Legends of the Alliance: In this anthology story, Locke is given an indirect mention by Knuckles.

The Lost Fox/Storm's Shadow: In both stories, Locke is mentioned when Austin rants angrily that Finitevus caused Locke's and Forrest's deaths.

Austin's Battle: When Finitevus meets Austin in the Lamarkie Village, he tells the younger warrior about the warning E.J. and Locke were given in regards to his arrival. This badly shakes Austin's faith in the Spirits in the Stars, especially when E.J. unhappily confirms this.

Austin's Flight: In the Prologue, Austin seeks out Locke in the Spirits' territory, and questions him on the warning. Locke tries to defend his decision, but this only serves to drive a very hurt Austin away.

Storm's Struggle: After Austin and Storm return from Ice Cave after Austin loses faith in the Spirits in the Stars, Locke visits Storm-who's watching Scorch the Solynx and Ripple the Frogadier train-and explains his and E.J.'s reasons for hiding the warning from Austin. Storm bitterly complains about what he's going to do, and Locke calmly says that Austin must find a way to get through his struggle alone.

Storm of Darkness: Though vaguely unnamed, Locke appears in two visions Boulder has. First, in Villain Revealed, Boulder has a vision of when Finitevus tricked Locke into leaving the Master Emerald. Later, in Shadows of the Heart, Boulder has a vision in which he sees three figures standing nearby. He does not recognize Locke(only knowing that he looked vastly different from Finitevus), but sees Michael Smith and Dallas Smith standing on either side.

Unknown, but likely the same as in the comics.

Unknown, but likely the same as in the comics.

Unknown but likely the same as in the comics. 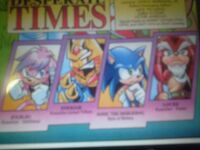 While most Echidnas don't believe in the Spirits in the Stars, it was confirmed in the Prologue of Austin's Flight that Locke is a Spirit.

Retrieved from "https://sonicfanon.fandom.com/wiki/Locke_(Burpy%27s_Dream)?oldid=1819711"
Community content is available under CC-BY-SA unless otherwise noted.