Start a Wiki
This is an article about Liu the Rabbit, a character created by Spyken (Emidikun on DeviantArt) on October 3, 2012. 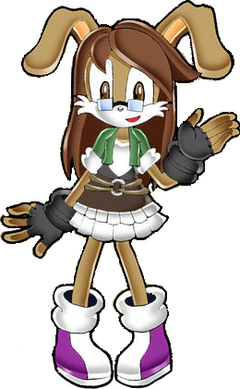 Liu is a ninja rabbit from the future and is the little sister of Lance (who was shunned by his clan for the loss of the the Midori).

Liu is a light brown rabbit with long dark brown hair and eyes.

She wears a green vest with rolled up sleeves, a black/white shirt, a brown skirt and deep purple/white shoes. She also wears little glasses.

Ten years later, her jacket is shorter and has the sleeves rolled down. She wears a tight black shirt and a tight brown pants. As a secretary she wears a short sleeved black top with a white blouse underneath, a black skirt and black heels.

Liu has a great empathy and is nice to everyone, which is rather weird considering the way she was treated. She has never been seen angry and, by Lance's account, would be a instoppable force if it happened.

She can be quite shy, as when she is around Max.

Liu is the second child of Dahlia the Rabbit and Jim the Hare . Her parents’ love was forbidden by her grandfather and as such Lance was sent away with his father. She would be born a bit later.

She grew up alone with her mother for 5 years, continuously harassed by other kids of being a bastard. She would let it pass and cry home. After Lance was allowed to return to the clan due to her grandfather’s health, he was to be the next head, she always was around him. Due to this, they became very close. Lance trained very hard for years to make his grandfather accept him and trained his sister in his free time.

When he was fifteen, Lance was to be crowned next head of the clan. The ceremony consisted of taming the clan’s katana, the Takai Jixyanpaa sword,and slash his initials on the wall of heads. Lance proved worthy of the blade and succeeded. But they were attacked a few minutes later, by Eggman Nega .

The clan proved too powerful for Nega’s machines and the victory seemed achieved. But then they saw that Nega had taken Dahlia hostage. He said he would kill her if they didn’t give him the Emerald. Lance was told by his clan to act like a true leader. The boy hesitated long and ended giving the Emerald to the man. In response Nega said he would let his mother live, but that she would be his slave and fled. The entire clan was enraged at Lance for his choice, as it had not given any good results.

The next day Lance fled.

When the clan learned of this, they declared him a ronin and erased his initials. Witnessing this, Liu went to search after him and told him the news. He said he didn’t care and wanted to continue but she showed him something she took from home; the Takai Jixyanpaa sword. She said that she believed in her brother and that he still could get his honor back. Liu’s words touched him very much, although he didn’t show it. When Thomas (Max) Pirlingham sent an announcement about making a difference by joining him in fighting against evil, they were the first to respond. She idoled Max since then.

Two years passed and during this time Eggman Nega attacked en masse. Every plan of his was stopped by the Peace Enforcers. On a attack in a big city, Spikes the Hedgehog reappeared and saved the day. After robot-cleaning the town, Spikes was attacked in his back, only to be "saved" by Keith the Echidna. Spikes commented that he was slow, with Keith replying that he doesn't have superspeed. This was the rebirth of Team Atom, Max' former team.

When not saving the world of Nega, they search their lost ones.

Genious intellect: As she was forbidden of learning fighting techniques from her clan, Liu interested herself in machinery, making her a capable inventor and skilled mechanic. Her interest grew after Eggman Nega's attack. While not at Max' level, this has led to the creation of various pieces of gadgetry.

Great agility: Having been trained by Lance, an expert ninja, Liu is very agile, allowing stealth movements and attacks.

Hand-to-hand combatant: Liu was trained by her brother to be able to defend herself and has thus a very great fighting potential.

Kindness: Liu's kindness has been exploited more than once, turned into naivety.

Various gadgets: Liu uses a lot of her gadgets in battle.

1 of 20
Add photo
Retrieved from "https://sonicfanon.fandom.com/wiki/Liu_the_Rabbit?oldid=1865181"
Community content is available under CC-BY-SA unless otherwise noted.