Lita is a paid assassin and is the enemy of Amber The Hedgehog(soon to come). She is a dangerous threat and her greatest power comes from her special inherited eyes. They are known as the Machiko Genkai.

Lita was once a very happy child she lived with her mother, father, her two brothers, and her baby sister. One day 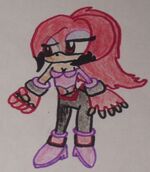 however tragedy struck as Lita unleashed Machiko Genkai near the family temple of the god Thoth. This unleashed a terrible plague. The shrine had a cast spell on it and when the third child (which was Lita) discovered her power it would be unleashed and all would die, but the third child. After learning of this Lita felt it her obligation to find the caster of this spell. At the age of 12 Lita set out to find this person. She soon ran into an old family friend who had moved to Chunan he was quite strong and had become a monk. He took in Lita, but she had to obide by his rules. Lita accepted and begged him to train her. He did so and taught her averything he knew. She had become very strong. Lita ran away from his home after she finished training and at the age of 14 she began to run again. She soon was attacked by about five thugs and was nearly killed by them however she was saved by a cloaked figure.He took her to an unkown area where she would become a member of "Hell's Assasins". Here she became even more storng and was taught how to use her eye ability. She was also taught to be quick and nimble. Lita was happy with the money she was making and decided to forget about her past for a while promising to one day get her revenge. Though she always thinks about it she never acts upon revenge.

Lita is a very stubborn and cold young lady. She takes no mercy and can be very cruel. She has a very dry but at times funny sense of humor. She can be very ditsy at times though and isn't the brightest book wise, but street with street smarts she's an einstein. She can be very cocky and sarcastic. And when she gets angry you better watch out. She is very hot-headed!! Lita also looses control. Lita is known to be very competitive, very suductive, very dangerous, and very short tempered. She is also known to be very outspoken and at times obnoxious or rude.To her teammates and comrades Lita can be a little more kind. Though she is still loud seductive and competetive she does it in a nicer fashion.

Retrieved from "https://sonicfanon.fandom.com/wiki/Lita_the_Hedgehog?oldid=1799960"
Community content is available under CC-BY-SA unless otherwise noted.