— (Life is too beautiful to waste. Love every moment of it.)

I no talk a lot. I just moved here from Spagonia. Sorry if my english sounds strange, but it is one of the hardest languages to learn...

— Lisa trying to explain to Abigail why she doesn't speak 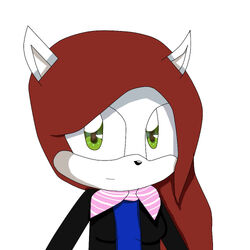 Lisa the Husky is a fan character created by Darkest Shadow. She is an italian singer, with a total of two studio albums, and currently working on the third one.

Elisabetta Alice Calfencio is a nineteen year old husky from a city in Spagonia. However, she moved to Hermenes City when she was thirteen to attend the MCA. She often speaks broken english, due to the fact that her country speaks Italian. With that being said, she has a strong italian accent. She is currently rooming with Abigail and Vixen.

Ever since she was ten, she wanted to be on the stage performing original material, so she started writing songs and producing them on her own, until she got recognized by a company entitled "Natalia Recordi". She signed and kept a contract until she moved to Hermenes City, where she found a new italian label.

When she was still in Spagonia, her first album had a single, "Senza Riversa", which was her breakout and got her discovered by several places outside of her country, even a few in Lacancory. The song made her album get 4x the amount of buyers and listeners than it did before.

When she moved to Lacancory, Lisa has shown to be very shy and quiet. Coming from a foreign country, she doesn't talk to a lot of people, mainly because she tried doing that in the 8th grade and became the laughing stock of Hermenes City. Now, she only talks to people that she has developed a friendship with, or speak italian. However, she usually responds by waving.

However, when she still lived in Spagonia, even before her big break, she was well known and popular. Outgoing and extremely sassy, she was very talkative.

Standing at 3'4 and weighing at 83 lbs., Lisa is a husky with white fur, covering all of her the skin on her body. She has red hair that goes down to about her hips. The front part is sideswept on the right and a left side bang covers part of her muzzle. The back of it is usually sideswept to the left, contradicting her front hair. She has a long white and bushy tail as well. Her eyes are disconnected with hazel irises and white sclera.

As shown frequently, Lisa speaks both Italian and English. However, she is still learning how to become fluent in english, as some sentences are in Broken english. Being born and raised in Spagonia, she even learned how to right songs in italian, which lead her to her stardom across her country.

Retrieved from "https://sonicfanon.fandom.com/wiki/Lisa_the_Husky?oldid=1798764"
Community content is available under CC-BY-SA unless otherwise noted.