Linkin the Hedgehog is a character owned by Twilightwizard0309

Steve Staley. You might know him as the english voice actor for Neji Hyuga from Naruto and River Marque from IGPX.

Linkin was born two hundred years in the future, after "The Day of Death". In the future, the forces of the Demon Zant are at war with the robotic hunters known as the Infiltrators, servants to their master, the artificial intelligance known as M.O.S.E.S., and the remainder of the Mobian and Overlander race are caught in the middle of the conflict. His father, known as the "Chosen Hero" was the leader of the Mobian/Overlander resitance. He trained Linkin in the art of sword combat. Soon, Linkin gained the skill to surpass his father. When he was ten years old, his father was killed on the battlefield. His death took a large toll on Linkin, and after his revelation of his father's death, Linkin accidentally discovered his light powers, which had blasted a hole in the wall of his home. For the next seven years, Linkin practiced using his light power. After he felt he had mastered it, Linkin joined the Mobian/Overlander resistance.

When Linkin was born, he was a very nice and happy kid. Since his father's death, however, it has made his personality grow cold. He usually dosen't want to get attached to things, for fear that something will happen to them, and he is overly protective of those he cares about, such as his friends, Aldez and Keish. He is hell-bent on changing his future, and will do anything to complete the mission, no matter what the costs.

No More Sorrow by Linkin Park 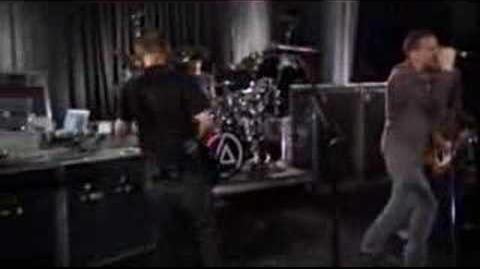 Retrieved from "https://sonicfanon.fandom.com/wiki/Linkin_the_Hedgehog?oldid=1799959"
Community content is available under CC-BY-SA unless otherwise noted.