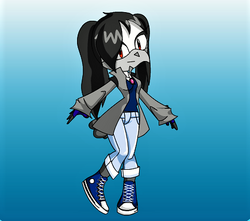 Lindsey is a slightly chubby blackbird with white skin, black and white feathers, a grey bill, and red eyes. Her hair is pulled back into two pigtails and is black. She wears a short-sleeved blue shirt, light blue stressed jeans, white socks, and dark blue sneakers. She wears a dark gray jacket over the shirt and a necklace with a citrine stone. Her tail is short, and covered most of the time by her jacket.

Lindsey is like typical teenagers: slightly socially awkward, still growing, and determining what she wants to do with her life. She has close ties to her friends, even though she sometimes acts aloof and sarcastic. Being a flightless bird, she will act self-conscious if that fact is brought up.

On the basketball court, Lindsey is hyper-focused on the game in front of her and hates distractions. She is currently the temporary co-captain of her basketball team.

Lindsey is the only child of Michael and Eliza Hawthorne. She was born to their wealthy suburbs of Chun-nan and grew up learning self-defense skills from her mother. In her eighth grade year, she met Trina, who was the captain of the basketball team. After tryouts, Trina complimented Lindsey on her skills and invited her to be the co-captain temporarily. Lindsey developed a small crush on Trina, which was (and still is) unrequited. She has not come out to her parents yet for fear of being shunned by them.

While in the basketball team, she met another member named Makayla that was close to her in age, and the two became fast friends. Trina became their 'sister', keeping them in line.

Lindsey does not have any powers, but she is an average runner and can lift about 20 lbs more than she weighs.

Although Lindsey does not have any powers, she is honing her skills as a martial artist thanks to her parents' upbringing. She is also a gymnast, though she doesn't practice it as much as martial arts. She is a skilled basketball player and usually comes up with helpful strategies.

Although she is a blackbird, Lindsey is unable to fly. She also cannot stand high temperatures and is incapable of swimming for very long without her feathers getting waterlogged.

This character is based off of an old character I had on a different Sonic wiki, but I decided to change her species from an echidna to a blackbird. Her name comes from a friend of mine in real life.

Retrieved from "https://sonicfanon.fandom.com/wiki/Lindsey_the_Blackbird?oldid=1874155"
Community content is available under CC-BY-SA unless otherwise noted.