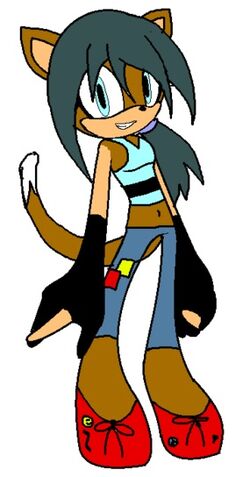 Lindsay the Porcupine is a fan character created by Darkest Shadow. She is the sister of Britney the Porcupine, except she is actually good instead of evil.

Lindsay Tulip FIrewood is a sixteen year old hedgehog currently living in a small house in Alskora City. She currently attends the MCA, an audition based boarding academy for students with special talents. She is currently in Room 146, sharing a room with her new friend, Jessie.

Lindsay is very goodhearted and sweet. She also is very likable and always chooses the right paths. Although many find her to be unattractive, her positive attitude tells her otherwise that she's perfect the way she is.

She is also somewhat brash and cocky. Though she sometimes tries to be as nice as possible, she sometimes has a tendency of bragging, but without her knowing. This sometimes makes people think she's self-centered, when really, she cares more about others than herself.

Lindsay currently stands at 3 feet and 4 inches, and weighs a good 80 pounds. She is an olive colored porupine, with fur covering her tummy, but not her arms. She has grey hair with three bangs, and it goes down to her waist. Her tail is long and pointed up, it also has a white tip at the end.

Lindsay wears a very light turquoise sleeveless crop top with a black stripe near the bottom. Her tummy can be shown from here. For bottoms, she wears baby blue jeans with one red patch and one yellow. It is cut for her legs. For footwear, she wears red mary-janes with black lases, and an e symbol to the left of it. She also wears mid-length black gloves with a hole in the pointer finger. She also keeps her hair tied up in a baby blue hair barrette.

Swimming- Lindsay is a very experienced swimmer. She has been doing it since she was young and got better at it as the years went on. Her favorite swim stroke is the breaststroke while her best stroke is her backstroke. She is currently on the Beach Cove Beavers, a world class swimming team. She is like a dolphin in the water, as she swims extremely fast. She is also a fan of synchronized swimming, as she performs gracefully and beautifully in the water.

Diving- Along with her spectacular swimming, is her amazing diving skills. She is on the diving team and is probably one of the best divers on the team, along with Michelle. Her favorite dive is the triple full double back on the platform. Her best trick is her quadruple pike gainer from a diving board. Her favorite event is the 8 meter diving board, and it is also her best event.

Poison Manipulation/Toxikinesis- Lindsay, like her older sister, has the ability to manipulate poison. She is able to make a toxic venomous pit appear from the ground, and potentially poison them. Although weaker than her sister, she is still learning her abilities. She is also able to withstand poisoning along with that ability. Most of the time, it comes out lime green, but if powerful enough, it becomes purple.

Retrieved from "https://sonicfanon.fandom.com/wiki/Lindsay_the_Porcupine?oldid=1666000"
Community content is available under CC-BY-SA unless otherwise noted.