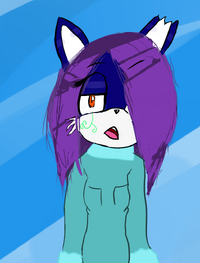 Lina was born along with her twin brother,Brink,who happens to look nothing like her except their eye color, in a loving family of four,until when Lina and Brink were 13,when their father turned against them after finding out that their mother, Sassy, lied about her being part of the rival demon clan and started to attack them each time he encountered them. Several times. Their mother,Sassy,took the both of them and moved away into Spagonia ,where they could live a peaceful life. At 15,Lina met 15 almost 16 year old Henry, a member of the Psychic Hedgehogs Clan. She fell in love after Henry charmed her with running away and starting a new life together. But a year later,Henry got Lina pregnant,and because of that,he left her.

Sassy was enraged about Henry, but being a former teen mom as well,she took care of Solar when Lina had school,and she finished with a graduation and honor roll.

Lina had everything, her family, her adorable son, her job as an engineer for G.U.N and all the luxuries of being happy. However Lina was caught in the crossfire when Eggman decided he would split the world. Then, as if by miracle, she was granted keeper of the Havoc Rubies by the last elder of the Ice Clan; the clan her father split from before losing contact with them, and united both Demon and Ice Clans.

When she was protecting one of the Havoc Rubies that was given to her, an unfamiliar group of International Police, S.P.E.C.S, ambushed her and kidnapped her for 48 hours, she harnessed the energy that was within the Havoc Ruby and within those 48 hours used her enhanced abilities to escape S.P.E.C.S's Recon Team: Gamma Blue.

Impressed by her admirable skills, Recon Leader Lotus Panthera contacted Lina and expressed her apologies, and went on to say that the Havoc Ruby she holds is very powerful, and seeing that Lina seemed too weak at the time to use the abilities that lay dormant inside of it, she sent out her squad to take it from her. Both coming to an understanding and agreement to the situation, at age 23, Lina had changed from being a simple engineer at G.U.N to a top military spy at Gamma Blue.

Solar isn't aware that his mother is doing all of this so Lina has to constantly leave her 8 year old son with either Brink or Sassy and tell him that she will reward him foreign treats for his good behavior.

Although while she is doing some missions, one thing still lingers on her mind:

When will Henry come back?

Lina is a dark,royal blue Arctic Fox that has long,slightly wavy purple hair. Her eyes are a red-orange color that can lure even the most innocent men to her call (however she usually doesn't realize). She has a glowing green mark on her muzzle area near her eyes and her ear was torn from a bad firefight. Lina usually wears her black work suit with orange bands at her forearms and red and sky blue stripes on each half of her body with a white four pointed star in the chest area, however it has been removed because doesn't want targets to recognize her. Her footwear consists of latex boots. She has winter wear that is light turquoise with fluffy cuffs that is an even brighter hue.

Lina is a self proclaimed 'lady-like' woman and tries to flaunt it, to first met strangers. Lina is very nosy, even for a former professional spy like herself, but easily warms up to people even if he doesn't know them. However she is someone who prefers to be a stay at home mom so she doesn't like going in public as much as she did.

Lina has a very secret party girl side to her, if she is drinking,though she can snap out of it in an hour. Something in her makes her have a multiple personality disorder depending on the season.In Spring,Lina becomes bubbly and bright. In the Summer, she is hyper, a daredevil, and a speed freak in a car. In the Fall,Lina is subtle, flirty, and charming. Finally, in the winter,she is gloomy,cool,and calm.

Lina has the power of Cryokinesis (The power to manipulate Ice.) She can create ice shards, daggers, slopes, shields, and control below freezing temperatures. With increased damage and power from her Havoc Ruby, she can make her snow slopes into a mile long avalanche, form heavy damaging and almost indestructible swords and shields from sheets of ice, and create glass-like ice bullets from her hand.

Lina also has a fair share of Demonic power from her mother, although it is usually to mess with people and scare them. She can,however, manipulate empty dolls to spy with (or teddy bears in the case to see if Solar is sleeping), create shadow weapons that is twice her length, or at the expense of exhaustion afterwards, combine the two powers to create an arsenal of deadly weapons and attacks.

Lina lures people to her beck and call just with her icy-but-flirty stare, like if Solar doesn't listen to her,she just stares into his eyes,then tells him to clean his room with her command. Solar is a good kid so this is only last resort.

She sense Chaos Emeralds since the Havoc Rubies have relatively the same powers as they do, although if a Havoc Ruby were to go missing, she would actually have to search for it because she can't detect it for some reason. This would be vice versa if a Chaos Emerald or a Sol Emerald were to go missing, Lina can detect them, but others can detect the Sol Emeralds or Havoc Rubies just as much as Lina can.

Supreme attacking speeds: This makes her useful as a battle partner,she could seriously wound someone in a matter of seconds.

Flexibility: Her flexibility makes her hard to hit with guns,since she always manages not to get hit. She could get grazed,but not hit.

Weaknesses: Fire can melt through shields and bullets, however frost flames can't do much.

Her son, Solar is the one she is always willing to protect, so if any dangers harm him, she will feel so much guilt.

She cannot bear to listen to someone for too long as she can accidentally reach into their thoughts with her demonic power, mixing her emotions and thoughts up as well.

Lina doesn't like rocks being thrown at her,because it breaks her Cryo shields.

• She has a rivalry with Sonic's and Amy's future daughter, Protea, but not so much with Axel.

• She has another with Pyro.

•In her original concept,Lina had short black hair, and some kind of blue suit.

•She is actually very,very lonely.

• Doing something against her son,can almost always causes her to unleash a shock wave full of demonic energy.

•She's actually from the future,on another planet not too far away from Mobius,but prefers to stay in the past and in Mobius for a while.

• In her time though,She constantly protect one of the Havoc Rubies,but if she isn't,somehow she'll always end up finding one,by seeing someone else with it. Then someone accuses her of stealing it anyways.

• Lina is the Unity of both Demonic,Ice, and now Psychic clans because of her son, Solar

Retrieved from "https://sonicfanon.fandom.com/wiki/Lina_the_Fox?oldid=1750945"
Community content is available under CC-BY-SA unless otherwise noted.