The reason given for cleanup is: Paragraphs

VenomTheEchidna, the author of Lily the Echidna, considers this page to be unfinished. As such, some sections may change.

"Whining and fearing your enemies won't get you anywhere... standing up for yourself and valiance will."
—Lily the Echidna

Lillian "Lily" Fontaine, better known as her title Lily the Echidna​, is a rough-and-tumble teenage girl, and is the younger sister of Venom the Echidna and Jake the Echidna. She has a slight crush on Knuckles, though he is completely unaware of her and therefore is unaware of the crush, making their "relationship" obviously one-sided.
Lily the Echidna 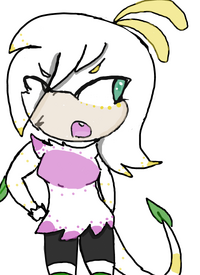 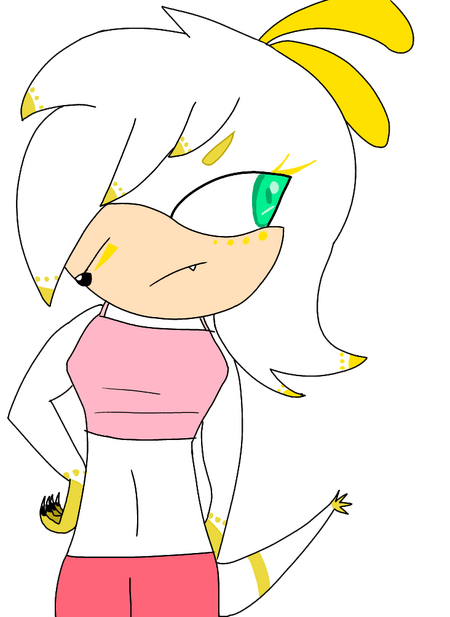 Lily is a well-structured, white female Echidna teenager with yellow markings and a pale peach muzzle. It should be noted that her natural fur and spine color is crimson with lavender markings; she only bears white fur due to her powers, and when her powers are stripped away from her, her spines and fur returns to its natural color. Her eyebrows are short and stubby; they often give Lily an aggressive look to her, which fits in with her rude, aggressive and vulgar attitude. She loosely resembles a lily; hence, her nickname. She has dull green eyes, and her bangs cover her right eye. Her hair, in general, is quite well-kept and clean, and looks appeasing. As mentioned before, she is very well-structured and fit, due to her constant, time-consuming and painful workouts. She has bizarre, leaf-like growths on her elbows and tail. Speaking of her tail, it differs from the tails of other Echidnas, as it is straighter and longer than a usual Echidna tail. As for attire, she wears a pink and white lily-resembling top with black skin-tight shorts and green boots that slightly resemble leaves. Her attire is nothing too advanced though, yet not that simple, either. Besides her main outfit, she wears other formal and casual pieces of clothing every now and then, as well as adjusting her "hair" (spines) occasionally, too.

Not long after Uriah had abandoned his infant and toddler sons and left them to die, he had gotten with another female Echidna. Unlike last time, he had actually gotten married to her, and they soon had a daughter together. Raised to learn the tyrant ways of her father, this child was extremely spoiled, often bullying the other children. She was also taught the ways of the sea; about pirates, about the navy, how to navigate a vessel, nearly everything. She constantly dreamed of becoming a sailor herself, despite the fact that only males could. Every time her father came back from a journey out in the sea, she would always be the first to sprint to him, wanting to know everything about it. But as the years passed, she grew tired of living a mundane life, and longed for adventure. Alas, for her father had forbidden her from leaving the city. In an attempt to escape the city, she left at dawn, when the guards were least active. Having this in mind and the fact that she was still meek and small, it was a piece of cake sneaking past the guards.

Weeks passed, and the girl was soon starving, for she didn't know how to hunt for meals. Because of this, she often stole the food of others, making her a common pest. Though -at the time- weak and extremely small, she amazingly could defend herself from enemies. The city, however, found no trace of the girl after she had left, and she was presumed to be dead. Years seemed to fly by for the girl - she was getting much stronger, and was even taught to hunt a little by a Mobian owl. She even managed to join a pirate crew, somehow, though she eventually got kicked out by age sixteen. But occasionally, she pondered about the life she once knew. Would she ever go back to the city? Or would she stay a wandering rogue? Sometimes, she even daydreamed about her half-brothers, and played with the idea of them having survived the supposed "murdered by bandits" lie her father had told her, though she believed it. Blissfully unaware of the fact that her brothers had actually survived, she soon came to stop at the small village of Knothole. She rested at an inn, and the next morning she encountered two Echidna brothers who were also there. The younger brother, not aware of the fact that the girl shared the same father as he, started to flirt with her, much to the girl's dismay. It took the elder one some time to figure out that she was the daughter of Uriah. Shocked, the three spilt off, all of them embarrassed. It would be many months until the girl encountered the duo again, and so she went back to her life as a rogue and lone pirate. *improvements in process...*

Finding out the cold hard truth

Lily is a stoic, serious Echidna. She may seem a bit harsh to others, but she had a difficult childhood, and a many Mobians mocked her or even beat her in some cases, because of her powers and looks. She won't take no for an answer, and is very determined to get things done immediately. Though serious most of the time -and especially in battle-, she has a sense of humor, and can be immature, despite the fact she never shows it. She is very protective of family and friends; if anyone injures them in front of her, they WILL be in for a major beating. And despite the fact that she's so aggressive, deep inside she's a softie; she DOES have a heart of gold. Rebellious and valiant, some might consider her to be more of an anti-hero than a real hero. Her caring side is rather seldom noticed; due to this, some Mobians see her as even more rude and vulgar. But this isn't the case, as she plays a somewhat motherly figure towards a few children every now and then. A no-nonsense type of person, many Mobians who are much more immature than her finds Lily to be dull, boring and bland. She is  often annoyed when people make statements that mentions her being too rude or serious; she usually responds with either profanity or a slugging in said person's jaw. Not one to make a faux pas, Lily is careful  with her social remarks, making sure she doesn't offend anyone in a major way.

"The name's Lily the Echidna. You?" Introduction.

"I'm just completely baffled..." When getting an "E" Rank.

"Think you can win against me? Think again! " Prior to a boss battle

"So elementary... " When winning against a boss.

"Swag? You mean acting like a complete and utter imbecile, right?" One of her more immature moments.

"Learned some new moves huh, shepherd boy? Well, so have I~." During a battle with Ion the Rottweiler.

Retrieved from "https://sonicfanon.fandom.com/wiki/Lily_the_Echidna?oldid=1805885"
Community content is available under CC-BY-SA unless otherwise noted.