Start a Wiki
This is an article about Lilith the Demonette (Jared's Version), a character created by Jaredthefox92 on 07/30/2015. 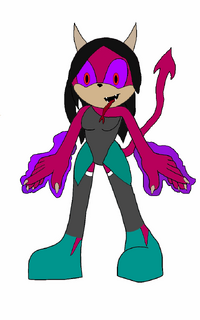 Lilith is the oldest daughter of Arnzarel the Revolting and believed to be the second in command of the Army of the Damned. she is known to accompany her father often and seeks to better her combative capabilities through trial by fire. She is known to possess a bizarre trait for demons that is supernatural reflexes, thus she is known as the "Ballerina from Hell" amongst mortals who have survived her and lived to tell the tale.

"You want to dance, little wraith? Very well! Let's dance!"-Lillith about to enter combat against Exspira.

Lilith is a spunky, energetic, and sassy demonette. She enjoys sparring with her siblings, (almost to the point of their annoyance), and is known to be the more outspoken and extroverted one. Her hobbies include acrobatics, athletics, sparring, and reading. Often she seeks to accompany her father for excitement and to get out of the lair while her two younger siblings prefer to stay indoors.However, she is also known to be the less cautious and more impulsive out of Arnzarel's spawn.

Lilith was once a young mortal girl named Lilian who possessed pyrokinetic powers, she was often shunned by both her father and mother and constantly disowned by them. However, when she encountered the giant demon known as Anzarel he was able to easily subdue her and instead of killing her he corrupted mind, body, and soul  transforming Rose a powerful half-daemon which he named Lilith. As time went on Arnzarel grew found of this once mortal now ascended demon and made himself to be her father figure of sorts. Eventually he would train her to fully utilize her powers after many sessions of much needed training.

Lilith possesses several abilities that are unique to her, as well as some fount in her father and her siblings as well.These include, but are not limited to:

Lilith is known for her main ability of possessing supernatural reflexes that allows her to not only traverse terrain and move around very easily, but makes her almost untouchable in combat.While she is known to be able to run at an average mortal speed she can preform all sort of bizarre and complex acrobatics and movements while even under pressure.This ability has given her several nicknames such as the "Devil Dancer" or the "Ballerina from Hell."

Once even hit Lilith possesses inhuman regenerative properties that allows her to recover from most wounds that would incapacitate a simple mortal.While she is mortally vulnerable at the heart most of her body would be able to fully repair itself within an hour after being wounded.

As her name would imply, Lilith has the erebokinetic ability to cloak himself when he is standing still via manipulation of darkness, however he can be detected with the right methods.

Nexus possess distinct supernatural senses that allows him not only to sense the mystical aura within another being, but also allows him to "smell" traces of magic and is even able to smell how pure or corrupt another mortal’s soul is.

Nexus is able to unleash a loud and continuous unholy screech thus disorienting his opponents. He can often use this move to either suppress an opponent or distract them long enough to close in and engage in melee combat.

Unlike her father, Lilith is believed to be pyrokinetic from birth and thus is able to conjure up her own flames and fire at will.

Lilith is known to have a few good weaknesses that can inhibit her ability to fight, as well as even defeat her if done so properly.Admittedly her comprehension of high rate spells is somewhat lacking, thus she can easily be bound or imprisoned by various magical spells or wards.Against weaponry such as lasers or any lock on like projectile her agility power can be negated as well.Unlike her younger siblings she was not gifted with the ability of flight and thus has to run and climb up high objects to move through the sky, as well as unable to teleport without the aid of a magical spell as well.

In terms of character flaws she seems to be rather impulsive and gun ho when it comes to entering combat, almost to the point of being very naive and easily tricked. She is the sort of "punch first and ask questions later" kind of individual and thus can find herself in trouble very easily.

Retrieved from "https://sonicfanon.fandom.com/wiki/Lilith_the_Demonette_(Jared%27s_Version)?oldid=1854465"
Community content is available under CC-BY-SA unless otherwise noted.