Beg your pardon, but would you care for some tea? 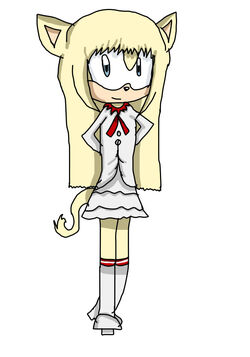 Lili the Cat is a fan character created by Darkest Shadow. Being a multi-quintrillionaire, she is one of the richest beings in the world. Because her wealth runs in her family, she gets most of her money from her father, who works at a highly successful company. As a job, she coaches and trains students in Street Fighting.

WILL BE REVAMPED SOON...

Not that much is known about Lili's early life and years of birth.

When she was around six, she learned her trademark fighting of Monegasque Gymnastic Street Fighting. She was very good at this skill.

Around eight years old she met her first best friend, Monica the Fox. The two spent much time together. Also, she had to take care of herself. Her father was now working a full time job as a businessman for the Rochefort Enterprises.

When she was nine, she met another one of her friends, Ashley the Cat. Ashley and her were growing pretty close. She also met another girl named Candlelight. The three and Lili were amazing friends.

By a year later, her skills in Monegasque Gymnastic Street Fighting were superior. She also discovered her undiscovered talent in piano playing.

At the age of 14, Lili was invited to stay at her father's house for a whole year. Her friends were depressed to hear this. When she moved, she also hired a butler: Sebastian. During this, her father lent her house to her.

A year later, she sold her house to a girl named Christina, who was eager to learn about her fighting. Her friends back in Beach Cove City wanted her back. Her stay at the mansion expired and she headed back home.

As of now, her street fighting got her into the Mariala County Academy. She currently goes there with her friends. Her training with Christina is also going pretty well. Also, somehow she learned archery in this timeline,

Lili is described as a very sweet, loyal and caring person. She very polite to everyone that she meets, and welcomes them into her life. She often makes a lot of friends by meeting them at school, or at one of her galas. She treats everyone, even the people she dislikes with the upmost respect that they deserve. Her kind personality is not what most people have expected from a rich girl like her.

Being raised by her father, post people say that she is a princess-like figure and role model. Because of her mother's highly strict discipline and teachings, she was raised to have great manners for whoever she is speaking with. She rarely ever, if not never, forgets her manners and refers to strangers as "Mr." or "Miss". However, after her mother passed, she was able to loosen up, but she still is expected to have her good manners.

Lili has also proven herself to be a perfectionist. Sometimes, the slightest mistake makes her have a fit and she won't stop trying until she fixes it. She wants everything to be flawless, even sometimes when she trains her students.

Lili currently stands at 3'8 and keeps her weight a secret. She is a cat with pale blonde fur and peach skin underneath it. Matching her skin tone, she has a peach muzzle, and her inner ears are also peach. She has no fur covering her arms or mid-section. Her hair is the same color of her fur, and it's long;going all the way down to her waist. The front of her hair has many small front bangs and two much larger side bangs on both sides that cover the sides of her muzzle. Her tail is middle-length and furry. Her eyes are connected and she has grey-blue pupils.

Currently, Lili likes to wear a white "Victorian-style" outfit. This outfit consists of a white long-sleeved blouse with lace trimmings around her cuffs and collar. There are three buttons on the right side of her top. Her top has an upside-down v shape in the front, and a rounded back. She also wears a red checker-patterned ascot tie with a silver button to hold the four straps together. For bottoms, she wears a frilly three-layered skirt, with ruffles even on the top of her blouse. For footwear, she chooses white boots with five-inch heels, white soles and a white strap with red edges and a gold button. Under that are red socks. Top complete her look, she wears white and red fingerless gloves.

Lili's trademark skill is her combat style. Her fighting style combines street fighting with gymnastics, called Monegasque-Style Gymnastic Street Fighting. She has been training in this skill since she was a toddler, and she is slowly growing to become a master of this skill. Every day, for about two hours, she trains and works out to improve her kick power, form, flexibility, and technique. She also works on getting new gymnastics skills to improve her move variety and come up with more combinations to use in combat.

Lili is somewhat talented at playing the piano. It happens to be that she was self taught. She has been practicing piano for a long time, starting at the age of four, and then becoming better and better as the years went on. As of now she is an amazingly high-level piano player and loves to practice her music during her spare time. She also likes to teach piano to her friends and younger children so they can grow like she did.

Lili is also a pretty good archer. She only started recently, about four years ago. At first, she missed the target by a long-shot. As of now, she hits on the red at average, and is capable of shooting bullseyes. She also uses this for when she has to shoot it at her targets, or at nets. She is still training, but she is truly a natural at this event.

Blaze the Cat- Lili worships Blaze due to the fact she is a princess. Other than that they are pretty good friends. Many people say the two make a pretty cool friendship as The Princess and the Rich Girl.

Sonic the Hedgehog- Sonic doesn't really know Lili, same with her. They would be considered friends, and Lili would look up upon him.

Monica the Fox- Moncia and Lili are very great friends. They interact a lot. Though Monica is a skating type person, Lili doesn't like doing it. With the exception of skating, the two love to hang out and do things together.

Candlelight the Echidna- Candlelight and Lili are also best friends. They interact many times when Lili is free. Ever since they met, they usually hang out.

Ashley the Cat- Ashley and Lili are best friends. They interact a lot when Lili is not training her student. Usually, Ashley saves Lili from any danger and Lili always repays the favor.

Christina "Christie" the Hedgehog- Christina is Lili's student in Monegasque Gymnastic Street Fighting. Usually, Christina visit's Lili's mansion to practice on her balcony. If not, she goes to Christina's house and hangs out with her as friends.

Sebastian the Fox Hybrid- Sebastian is Lili's butler. They are pretty good friends. Usually, Sebastian doesn't enjoy being on the job that much. However, his girlfriend is skeptical about this "friendship".

Michelle the Cat- Michelle and Lili have a strange relationship. Michelle used to think Lili was dating her boyfriend, and hated her. Later, Lili befriended her and found out she does gymnastics to become gymnastic buddies.

Krys the Alicorn- Krys and Lili are good friends. Lili first met her when she was asking her if she played the piano, but she plays the organ instead. After hearing her play, Lili and Krys often have little duets.

Alexis Petals- Lili and Alexis don't really know each other. When Lili was playing her piano, Alexis started to sing. Then they became friends and started to have duets.

Retrieved from "https://sonicfanon.fandom.com/wiki/Lili_the_Cat?oldid=1852979"
Community content is available under CC-BY-SA unless otherwise noted.