The author of Lilac "Rosebud" Wood considers this page to be unfinished. As such, some sections may change.

Despite being a fox, Lilac bears the appearance of a hedgehog, due to her quill shaped hair. Other than that, she is simply a pale blue fox. She is shorter than other Mobians her age, and is also skinnier. However, one thing makes her unique, and that is her rose marking by her right ear. Otherwise, she is just your average Mobian fox.

Rosebud as she appears in Skid the Hedgehog: School Survival. Thank you so much, Skid! This is better than I imagined!

Wikikinetic (Whenever Speedy isn’t available at the time.)

Sky Blue (Pink and Green for a specific rose marking)

When everyone is wide awake

I really need to get them into the relationship section.

Rosebud is optimistic and lively, and she cares for her friends. She would die for her friends if she had to. She loves all forms of music, color, excitement, and dancing. However, her personality is not all sunshine and rainbows. She is sometimes seen as creepy and strange. She is trying to fix this image, and in some aspects, she succeeds. In others, however, (like, keeping her friends out of danger) she fails constantly.

As a hydro and cryokinetic, Rosebud is able to control all forms of water, whether it’s solid, liquid, or gas. She can also create water, but can only do so when full of energy.

I can’t come up with names, so I’ll list my ideas:

Flash Flood: basically what it says on the tin. It’s Rosebud’s most powerful move.

Unnamed Ice Attack #1: an attack where Rosebud can shoot ice like bullets.

And more to come!

Rosebud has some minimal experience in ninjutsu, and is hoping to improve her skills. She can also wield a katana.

Lilac is very good at skating, whether it’s ice skating or roller skating. She’s better at roller skating, but (unless against a professional or true champion) she can still be queen of the ice.

Having a previous life as a child actress, Lilac has perfected her acting talents. When in battle, she can easily fake death in order to avoid real death.

Lilac isn’t very strong in battle, and her health drains quickly. She isn’t very good at coming up with battle plans, either.

Rosebud is the youngest child of the Wood family, being born 2 minutes after her twin sister, Anna. She was the center of attention during her infancy, being the youngest. However, this didn’t keep her from getting into trouble, and she often accidentally broke or otherwise destroyed things. This pissed off her older sister, Marie, and it made her more angry when Lilac usually got away with it.

When Lilac was younger, her favorite thing to do was swim, and she still swims to this day. This was also around the time that her sister started dating, and that’s when Lilac met Pallete. Lilac and Pallete were generally friendly toward each other, until one fateful day. Lilac and her family were at the swimming pool one day, and she realized that Pallete and his friend, Oliver, were also there. Lilac wanted to go over and say hello, but they were over at the deep end, and she couldn’t swim in deep waters. She decided to take a risk and go to the deep end, and ended up under the water, barely breathing. Not knowing what to do, she pulled on Oliver’s leg with force, dragging him under the water. After a few minutes of staying under the water, Oliver drowned, but Lilac somehow lived. After the incident, she thought the pool was dangerous and that they should hire better lifeguards. Then she went home.

A few years later, when Lilac was about 10 years old, she was still thinking about the terrible thing she’s done, even though she started to feel more happy. One day, she met someone who made a mistake like her, Platinum. At first, they thought they had nothing in common, as Lilac was optimistic and loud, while Plat was more quiet and pessimistic. However, they started to grow closer together, and became best friends. However, a few months later, they started to develop a crush on each other.

As soon as Lilac started to forget the terrible thing she done, someone started filming her for no good reason. This was so she could get her own she on television. At first, she liked the attention, but when it started to tear into her real life, she started hating it. But the thing she hated most was her and Platinum starting to slowly tear apart. Eventually, things got worse. Her family has been taken away by security, so she decided to set out to find them.

“Hello people of Mobius/This Strange Realm!” Her greeting everyone she sees.

“I can’t help it! I’m just...HOLLY JOLLY HIPPY HAPPY!” Her being overly excited.

“Okay, I’m going to make a good beat this time. (Breathes in. Proceeds to beatbox. Gets slapped by either Andy or Knuckles.) Ow! What was that for?! I was about to get into the good part!” I can’t explain this.

“Oh noes! A PESSIMIST?! We must call someone right away!” Her seeing someone sad.

“Say hooray for Rosebud!” Getting an S rank.

“That was alright.” Getting a B rank.

(If you have any suggestions, let me know!)

But in reality, she is voiced by her creator.

(If your OC is Rosebud’s friend, feel free to add him/her here) 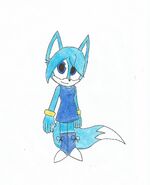 A beautiful photo done by Lee.

A photo by me!

Lilac as an avatar in Sonic Forces. (Yay.)

Lilac and Platinum, drawn by Xoph 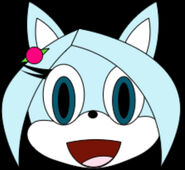 A Rosebud emote, drawn by Lucent 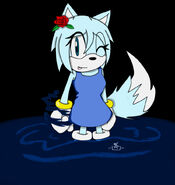 An amazing picture of Rosebud using her powers. Thanks, Skye!

Rosebud with Kibo and Skid. Drawn by Skid and made for the Crossverse. 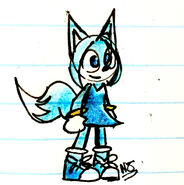 An adorable picture drawn by N8! Thank you! 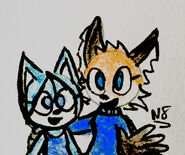 Rosebud and her friend, Akia, again drawn by N8

Rosebud in an alternate dress, drawn by Apples. Thank you so much! 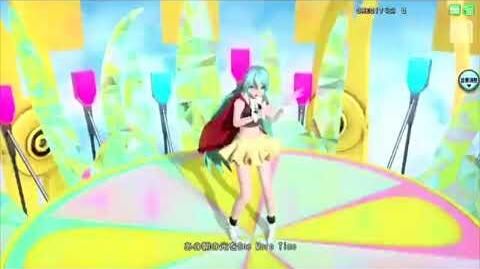