Start a Wiki
Lightningbolt, called Lights for short by most people(except for Sheila, Ivy, other members of Team Ice) is a Cyan Wisp that follows Ivy around. They first met on the Wisp Transporter Island, an island that Wisps use to go back and forth between the 2 worlds. She can translate both him and Spikeball because of her translator, she doesn't need the inner power that the wisps have that allows the owner to translate them.

He can crackle electricity at any of his foes. Like a regular Cyan Wisp, he can turn into a laser and zoom around. He can also transfer his electricity into Ivy's vines, making Ivy's vines crackling with electricity.

Sophana the Rabbit and Spikeball(best friend)

Crystal the Raccoon and Kayla and Chocolate

He acts very, 'tude-ish, and speaks sort of slow, but is however, quiet, despite how fast he goes. 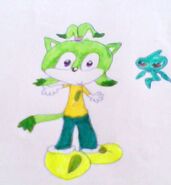 Lightningbolt next to Ivy's new design.

Drawing of Lightningbolt
Add a photo to this gallery
Retrieved from "https://sonicfanon.fandom.com/wiki/Lightningbolt_%22Lights%22_Cyan_Wisp?oldid=1301651"
Community content is available under CC-BY-SA unless otherwise noted.