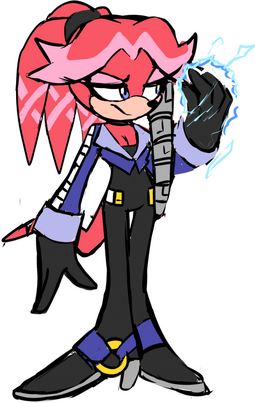 
Bringing pain to others
Dislikes
Julie-Su

Lien-Da is a character in the Marshalia13 Universe. She is currently the co-leader of the Dark Clan alongside her twin brother, Kragok. A red, female, anthropomorphic Echidna and an enemy of Julie-Su, her half-sister.

When Lien-Da was about sixteen years of age, her father met and fell in love with Mari-Su. Shortly afterwards the two got married, which deeply upset Lien-Da and her brother, who not only saw her as a threat to their own ambitions, but believed that they should have had a say in the matter; Lien-Da was especially indignant at the apparent nerve of her father. One year later, Mari-Su gave birth to Lien-Da's half-sister Julie-Su, though Lien-Da and Kragok never accepted her as family and completely ignored and shunned her. Sometime later, Lien-Da personally assassinated Mari-Su, though effectively staged it to make it appear as if her death was a tragic accident.

Not long afterwards, Kragok and Lien-Da met in secret to discuss the idea of killing their own father to secure their "birth right" and become the first joint-commanders of the Dark Clan. While Lien-Da proved more than willing to carry out the task, Kragok showed some hesitance at the idea of killing their birth father. In the end, the two agreed to eliminate Luger, feeling that Moritori Rex had been more of a father figure to them. Using a powerful and experimental weapon provided by Kragok, Lien-Da targeted Luger while he was alone cataloguing a series of crates. Despite the failure of the attempt, Luger vanished and presumed dead and Lien-Da and Kragok rose to power.

In Knuckles the Echidna, Lien-Da assists her brother in organizing an attack on Echidnaopolis, only to be driven back by Team Sonic and Team Vixi. Later on, she fights Julie-Su who was reminded of where she came from.

In the Freedom Fighters, Julie-Su comes into conflict with Lien-Da and Kragok as Julie goes to reveal the secrets of her past.

Lien-Da is a ruthless, femme fatale-style character, and seems to care only for herself. She knows how to seize power and can be quite sneaky. Despite this, she actually cares deeply for the echidna people. Although she is clever, she knows when she is in need of assistance. Nevertheless, she has little regard for life, and is willing to kill to further her goals. Lien-Da seems to enjoy power. Her hatred of her half-sister Julie-Su seems to stem from the fact that their father loved Julie-Su more. This jealousy shows in her behavior towards Julie-Su.

Lien-Da has demonstrated basic combat skills. A competent military tactician in her own right, her leadership has, however, failed to yield the same success as the commanders before her achieved. She also has above average understanding of technology and is capable of operating both firearms and airborne vehicles.

Lien-Da's left foremost dreadlock, like her half-sister's, has been replaced with a cybernetic dreadlock, and it is implied that she possesses internal implants as well. She can also manipulate electricity by shooting beams of it, or creating a whip out of it. When she does this her eyes are electrified, which all comes from her cybernetics.

Retrieved from "https://sonicfanon.fandom.com/wiki/Lien-Da_the_Echidna/Marshalia13%27s_Universe?oldid=1786976"
Community content is available under CC-BY-SA unless otherwise noted.