Start a Wiki
This is an article about Liam Scarlet, a character created by CrimsonFlame2K on 05/14/2015.

Not to be confused with Liam the Cat or Liam the Chesnaught.

CrimsonFlame2K, the author of Liam Scarlet, considers this page to be unfinished. As such, some sections may change. 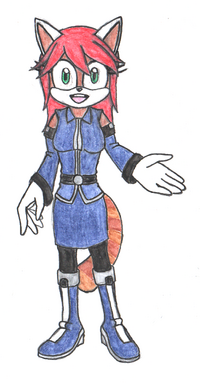 Don't worry about me, sir. As long as I'm able to help out, I'm alright with staying in the sidelines. Besides, the three of you should be more than enough for this.

Probably one of the friendliest faces you'll see around here, Liam Scarlet is the personal assistant of renowned GUN official, Whirlwind Reyes, and a loyal soldier for the organization’s military department with the rank of 1st Lieutenant. She appears as a supporting character in the Clash of Mythics series, beginning with Clash of Mythics: Genesis, where she assists Whirlwind, Shadow, and Kris as their mission control.

Liam is a Mobian red panda standing at four feet, seven inches. She has a fairly curvaceous albeit otherwise-average physical figure covered in brown fur, scarlet red hair that reaches her shoulders, and a brown tail with a ring-like pattern taking on a lighter brown coloration. She also sports white fur on her muzzle and outer ears, while their insides sport the same brown fur. In addition, she sports greyish-black fur around her chest, abdominal area, and feet, and irises that sport a light bluish-green hue on her eyes.

In terms of attire, she is usually seen in her GUN uniform, which consists of a pair of dark blue sleeveless jacket with silver accents, a matching pair of detached sleeves with the right sleeve bearing the GUN insignia, and a matching pencil skirt that reaches only slightly above her knees. She also dons pair of white gloves, a pair of black opaque leggings, and dark blue military boots with silver accents.

Meanwhile, her casual attire mainly consists of a fairly loose black t-shirt, a pair of blue skinny jeans, and blue sneakers. She also dons a black leather belt with a silver buckle and is sometimes seen with a grey jacket whenever the weather is fairly chilly.

Liam is generally shown to be a friendly, compassionate, and optimistic albeit socially-awkward individual. She is able to get along with almost everyone she meets just fine and is generally seen by many of her colleagues at GUN, including the aloof Shadow and the sharp-tongued Kris, as something of a little sister figure. Meanwhile, she’s also the kind of person who often opts to be as honest as she needs to be and believes that she wouldn't make a good liar, even if she wanted to.

On the flipside, she is also a rather meek and timid person, as well as prone to becoming worked up over any inconvenience that may befall her friends even when there isn't any apparent need to be - something that even her closest friends are occasionally put off by on occasion. In addition, she occasionally experiences episodes of self-doubt and a level of anxiety, primarily in regards of how outclassed she is in battle when compared with some of her more powerful comrades. This is especially present when it comes to Whirlwind, her direct superior whom she has been frequently hinted to possess complicated feelings for if her frequent moments of shyness around him is any indication.

Make no mistake though, despite being one of the most empathetic and bubbly characters in the series, Liam is perfectly capable of taking care of herself. If the situation calls for it, Liam will immediately jump into the battlefield with little hesitation and help out as much as she can with her impressive agility and aim. She’s also a persistently loyal friend - almost to a fault, one might add - and almost always refuses to turn her back on her allies and friends when it counts, even when they refuse her help - especially if they refuse.

As a GUN soldier, Liam is skilled in the usage of firearms and other types of equipment and has amazing skill in aiming. In most situations, she favors the usage of a pair of either semi-auto pistols, submachine guns, or shotguns. She is also suspiciously well-versed in the usage of sniper rifles and is often seen making quick work of practically every single target that shows up on her sights whenever she does gets her hands on one, to the point that some have expressed worry that they themselves might be shot by a sniper shot from Liam.

While she doesn't quite stack up to most of the other characters in the series, Liam is incredibly nimble and dangerously quick on her feet. This proves to be pretty helpful whenever she's in a rush and/or needs to cover distance quickly. She also comes packed with an impressive level of skill in close-quarters combat and martial arts, as well as espionage and stealth skills that could make Rouge blush a shade or two.

My first ever drawing of her. It's a load of crap.

My first attempt at drawing her in several years. It's better... but with a few noticeable issues if you look close enough. So it's probably a load of shit that way too.
Add a photo to this gallery

Retrieved from "https://sonicfanon.fandom.com/wiki/Liam_Scarlet?oldid=1856011"
Community content is available under CC-BY-SA unless otherwise noted.