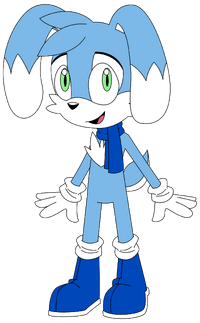 Levi the Hare is the leader of the Gelid Forest Freedom Fighters. He is one of its original two members, with the other being Jazelle the Lemming.

A slim hare who stands about three feet tall, Levi has a short muzzle with a triangular nose, long, upright-standing ears that fold forward near the base, and a short, fluffy scut of a tail.

His thick, insulating fur is primarily aero in color, with a white muzzle, eye markings, ear tips, and chest fluff; the underside of his tail is white as well. He has no hair on his head, instead having two longer tufts of fur, and his eyes are light green in color.

A speedy combatant who trades defense for offensive presence, Levi makes use of his natural agility to launch strong and quick physical attacks. Being a hare, he has powerful legs that not only allow for strong kicks, but let him bound away from most danger before it can touch him. His large ears are very keen, and his front teeth are hard and deceptively sharp, making for a nasty bite.

Levi is a moderately adept cryokinetic, and primarily uses low-tier and simple to wield techniques of the Ice Element, such as Ice Shard and Ice Punch.

Levi is resistant to the Elements of Ice and Water. He is also quite agile, able to dodge slow-moving opponents and attacks with ease. His thick fur also gives him great protection against both the cold and against weak, Ice-aligned attacks.

Levi is weak to the Elements of Fire and Earth. His defenses are subpar, forcing him to rely on his agility to survive. Being a manipulator of Ice, severe ambient heat can render his powers nigh useless. His thick fur also leaves him rather prone to heat exhaustion.

A friendly and happy-go-lucky hare, Levi seems intent on seeing the best in everyone, typically with little regard to how they see him; an example of this was his (failed) attempt to persuade Lazarus' rogue older brother, Baltassar, to defect from the Artika Egg Army.

Levi's good intentions can sometimes get him into trouble, as he is also a fair bit gullible and naive, and this can make him easy to take advantage of. He can also be a bit obnoxious due to his personality. He also tends to be a chatterbox.