You know what they say: Keep your friends close and your enemies closer.

Leticia "Letty" the Mouse is an 18-year-old anthropomorphic female mouse who comes from a very rich family. 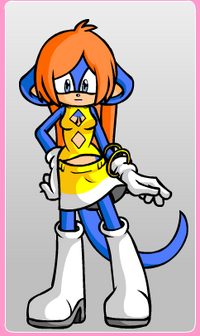 Born to an unnamed parents who were tycoons, Letty was the daughter of the upper-class family.﻿

Letty's curves are a mix of athleticism and voluptuousness. She has orange hair that is straight and coming down to her waist with front bangs. She wears a yellow sleeveless top that has two diamond-shaped cut-out patterns, showing off her cleavage and stomach, a yellow and white miniskirt, gold bangles on her left arm, and white boots. She also wears a pair of basic white gloves and a pink lip gloss.﻿

Letty is an attractive, confident, sassy, vain overachiever who always uses her good looks and brains to get whatever she wants. Being the daughter of the wealthy family, she develops a haughty behavior towards anyone who are below her social status. She likes the life of luxury when she lives on her own at her penthouse condominium where she can take care of herself and she doesn't like being told what to do. Letty is obsessed with trendy fashion because of the way she dresses. However, in spite of her spoiled rich-girl persona, she is willing to show a nicer, friendlier, more gentle side of her. Because of this, she opens her heart to people, including her family, and understands their problems.

During her few years of training, Letty has advanced combat skills, which have made her the top black belt in competitions. She can run faster, but her speed matches Blaze's. She is an expert swimmer who can swim at great lengths.﻿

Letty's Extreme Gear is Fancy Bombshell; it is a grind-type gear and can convert into a bike-type gear. It is orange with the blue cherry bombs printed all over it.

"My name is Leticia. Leticia the Mouse. You can call me Letty if you like." -Introduces herself

"Ready as I'll ever be." -When being selected.

"Wonderful." -After getting an S rank.

﻿"That was totally groovy!" -After getting an A rank.

"That was good." -After getting a B rank.

"Yeah, whatever." -After getting a C rank.

"Wait until my lawyers hear about this!" -After getting an F rank.

Her outfit from Sonic Riders series 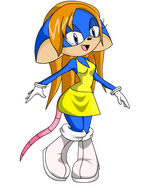 Add a photo to this gallery
Retrieved from "https://sonicfanon.fandom.com/wiki/Leticia_%22Letty%22_the_Mouse?oldid=1774087"
Community content is available under CC-BY-SA unless otherwise noted.